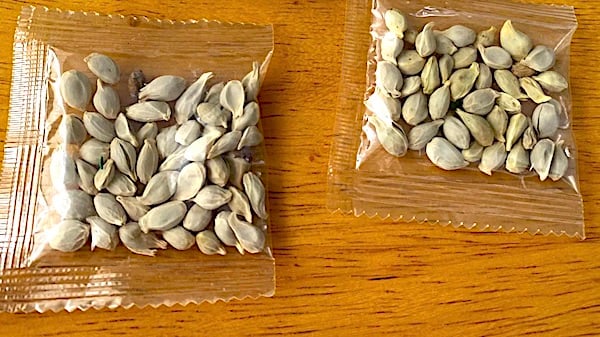 In recent weeks, consumers across America have reported getting unsolicited and unordered packages of seeds from China.

And it cannot be ruled out that sending unwanted biological materials to random Americans is an attack on the U.S.

So believes China expert Gordon G. Chang, the author of "The Coming Collapse of China" and a senior fellow at the Gatestone Institute.

"China for decades has been broadening the concept of warfare, and with the mysterious seeds there just may have been another attack on the United States," he wrote in a column on Gatestone's website.

USA Today reported the U.S. Department of Agriculture already has identified 14 different kinds of seeds in the mysterious packages.

They have appeared in all 50 states, and agricultural officials have warned not to plant them.

The seeds include flowering plants such as morning glory, hibiscus and roses, while others are cabbage and herbs, including mint, sage, rosemary and lavender.

The USDA asks consumers not to plant anything that arrives unordered from China, and to keep them.

"At this time, we don’t have any evidence indicating this is something other than a 'brushing scam' where people receive unsolicited items from a seller who then posts false customer reviews to boost sales," the federal agency cautioned. "USDA is currently collecting seed packages from recipients and will test their contents and determine if they contain anything that could be of concern to U.S. agriculture or the environment."

In Texas, state agriculture officials warned, "An invasive plant species might not sound threatening, but these small invaders could destroy Texas agriculture."

Chang explained China has a reputation for pursuing unconventional methods of war and being persistent in those attempts.

The State Department's recent report to Congress said China possessed an "offensive biological warfare program from the early 1950s to at least the late 1980s." And there's no information showing Beijing met treaty obligations to destroy its program.

"Moreover, China today is almost certainly conducting biological weapons research in violation of its obligations. The United States has compliance concerns with respect to Chinese military medical institutions' toxin research and development because of the potential dual-use applications and their potential as a biological threat," the State Department report noted.

And disturbingly, he wrote, it appears Beijing has begun targeting ethnic minorities with "potential biological experiments."

It has been suspected of using viruses, including the SARS epidemic in 2002 and the current COVID-19 pandemic, which some suspect began with a leak from a bioweapons lob in Wuhan.

"Attacking the world — specifically the United States — with disease is consistent with the doctrine of China's People's Liberation Army, as is evident from 'Unrestricted Warfare: China's Master Plan to Destroy America,' the 1999 book from two Chinese colonels," Chang wrote.

"Moreover, there is also an infamous statement attributed to Gen. Chi Haotian. In a secret speech to senior Communist Party officials sometime around 2002, Chi, then China's defense minister, stated there was a need for 'new living space' because of the exhaustion of existing Chinese territory. Chi suggested the 'mass colonization' of the land occupied by United States as the best option," he said.

The current distribution of seeds, therefore, is suspicious.

"Whatever the reason for their distribution — commercial or geopolitical — the seeds can cause great damage to the United States," he warned.