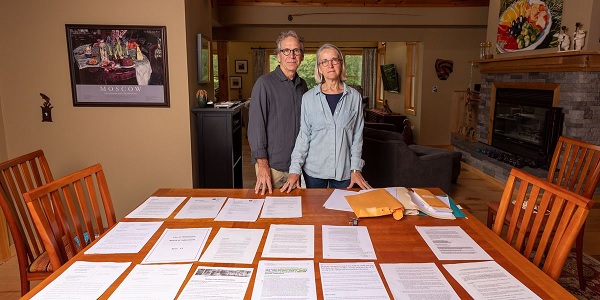 Peg and David Schroeder purchased a vacation home in Wilmington, North Carolina, to use during their retirement.

They needed some income from it when they were not there, so they worked with a lawyer to make sure it would qualify as a vacation rental. They went ahead and invested another $75,000 in renovations.

A new ordinance requires that no more than 2% of the residential properties in the city be vacation rentals, and no two can be within 400 feet of the next one.

Since their neighbor also had a rental, the Schroeders went through a city lottery and lost.

The Institute for Justice has taken up their case.

"Using a highly controversial land-use tool called 'amortization,' the city gave the Schroeders one year to supposedly recoup their entire investment in their property, including the cost of the renovation. After that, they would have to cease renting it," IJ said.

So the Schroeders sued.

"Before we bought the property, we did everything right," Peg Schroeder said. "We had a realtor show us only listings that could be offered as vacation rentals, and before we purchased, we even had an attorney look into the applicable zoning and housing restrictions. It took us eight months and about $75,000 to renovate the home, and just as we put it on the market to rent, the city pulled the rug out from under us."

Because the city's ordinance strips the Schroeders of a property right – the right to rent – without compensating them, it will be up to a court to decide whether the ordinance is allowed or the Schroeders are compensated.

"By capping the number of vacation rentals, Wilmington is effectively changing the rules in the middle of the game," said Institute for Justice Senior Attorney Robert Frommer. "The city’s decision to regulate vacation rentals violates state law, and its use of a controversial tool called amortization to put a ticking time bomb on Peg and David’s rights violates the North Carolina constitution."

IJ said virtually every state requires that cities compensate property owners if the municipality takes property or reduces its value.

The case focuses on the Schroeders' loss of the right to rent as well as the lottery system the city uses.

"Property rights cannot be simply raffled off for the benefit of one small class of people at the expense of everyone else," said IJ constitutional fellow Adam Griffin. "By establishing a two-percent cap and squeezing out all other property owners via a lottery, that is precisely what the city of Wilmington has done here. That violates the North Carolina Constitution."

The case is in New Hanover Court of Justice, Superior Division.