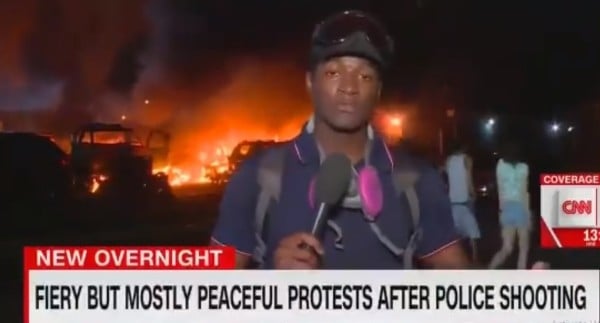 CNN is being mocked across social media for an on-air graphic describing rioting in Kenosha, Wisconsin, as "fiery but mostly peaceful" with flames in the background.

Jimenez stood in front of a raging fire while a chyron at the bottom of the screen declared "FIERY BUT MOSTLY PEACEFUL PROTESTS AFTER POLICE SHOOTING."

Caleb Hull, who posted the video on Twitter, wrote: "You cannot make this up … A CNN reporter is standing in front of a building engulfed in flames and CNN's chyron reads: 'FIERY BUT MOSTLY PEACEFUL PROTESTS AFTER POLICE SHOOTING.'"

Twitter user A.G. Hamilton wrote: "Clowns. Irresponsible clowns. It's not even funny. Months of enabling violence and destruction by ignoring and downplaying it, thereby eliminating any pressure on politicians to take action,"

Matt Whitlock, senior adviser to the National Republican Senatorial Committee, said, "'Fiery but mostly peaceful protest' is so absurd that if it were satire you'd think it was lazy and unimaginative."

In the film, Nielsen's character Detective Frank Drebin tries to disperse a crowd in front of an exploding building saying: "Nothing to see here. Please disperse."

The Twitter news-aggregating site Twitchy noted the image was from the early hours of Tuesday morning, "which means 'mostly peaceful' was *after* two protesters were shot and killed and one wounded."

The blog said President Trump might have to count it as a contribution to his reelection, as it likely will be used in many campaign ads.

"I want to be clear on how I characterize this. This is mostly a protest. It is not generally speaking unruly but fires have been started," he said.