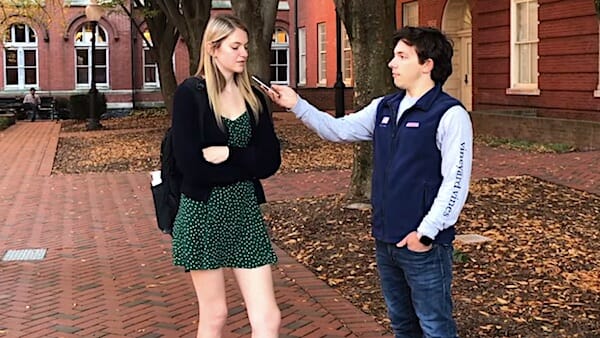 Students at Syracuse University who see or hear those situations from which arise claims of "bias-motivated" speech, or worse, are being told they could be punished if they don't get involved.

The situation was profiled by Jonathan Turley, the famed Georgetown University law professor whose positions often align with progressive interests.

He noted that students were told recently that, "The Cody of Student conduct has been revised, based on your input, to state that violations of the code that are bias-motivated – including conduct motivated by racism – will be punished more severely. The university also revised the code to make clear when bystanders and accomplices can be held accountable. The code will be prepared and distributed for students to sign in the fall."

Turley pointed out, "The law has always drawn a line between malfeasance and nonfeasance in considering unlawful acts, but Syracuse University is about to eradicate any real distinction in newly proposed rules by Professor Keith Alford," the university's first diversity and inclusion officer.

Turley explained the rules would punish students "for simply witnessing 'bias-motivated' incidents and 'acts of hate.'"

The change reportedly was demanded by an organization known as #NotAgainSU, which insisted on expulsion for "individuals who witnessed the event or were present, but did not take part."

In fact, the organization lists those with a "bystander" category first among those in three categories targeted for punishment if they have any connection to such incidents.

After listing short-term demands such as "different punishments for different levels of involvement," and a series of long-term demands, such as more counselors, a building for "multicultural offices," and more, the group said those classified as a "bystander" need punishment if they to "not take part."

Turley explained, "It does not go as far as the student group demanded in requiring expulsion, the rule also does not clearly state how silence or inaction will be judged in any given circumstance. It appears left up to the investigators. That uncertainty will prompt many to guarantee compliance by speaking or acting to avoid even the chance that they might be subjected to a highly damaging bias charge. "

He noted the school confirmed plans to install cameras in a long list of campus locations.

"Thus, any student who failed to immediately act would be observed and presumably at risk of being investigated or charged under the new rule," he said.

"Given the rising concerns over the erosion of free speech on our campuses, the punishing of students for nonfeasance for merely being witnesses or passive adds a new chilling element to speech. It is not just silencing those who now fear expressing their views on campus. It would now require speech and action to avoid possible discipline. For those students, the new rule creates a 'prove you are not a racist' (or biased) burden," Turley said.

"The Supreme Court has long treated compelled speech cases as some of the most serious denials of free speech. In West Virginia Board of Education v. Barnette, 319 U.S. 624 (1943), Jehovah’s Witness family challenged the mandatory Pledge of Allegiance. The Supreme Court struck down the rule as a denial of the students' 'freedom of mind' by forcing them to 'declare a belief.' It stressed: 'If there is any fixed star in our constitutional constellation, it is that no official, high or petty, can prescribe what shall be orthodox in politics, nationalism, religion, or other matters of opinion or force citizens to confess by word or act their faith therein.'"