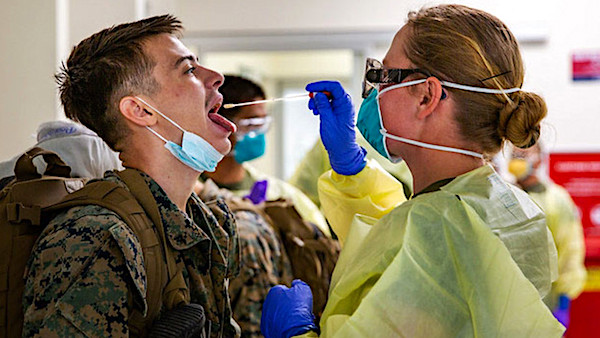 Marines assigned to Marine Rotational Force - Darwin undergo biosecurity and COVID-19 testing as they arrive at Royal Australian Air Force Base Darwin in Darwin, Australia, July 24, 2020. They will reside in quarantine accommodations until they receive a second negative COVID-19 test and complete their 14-day stay. (U.S. Marine Corps photo by Cpl. Sarah Marshall)

Coronavirus infections in the U.S. are beginning to decline overall, with some of the hardest-hit states improving significantly, according to an analysis by Axios.

Two of the worst hotspots in the country, Arizona and Texas, experienced significant declines in their caseloads: 16% and 21%, respectively, said Axios, which is regarded as a left of center news site.

Axios said the other major summer hotspots, California and Florida, "have shown little improvement after weeks of deterioration."

However, Jennifer Cabrera, editor of the Florida-based Alachua Chronicle, points out on Twitter the number of deaths that states report each day do not reflect the number of deaths on that particular day. In fact, the 257 deaths Florida reported on Friday is an accumulation of deaths spread out from June 25 to July 29.

She has published a spreadsheet that accumulates the numbers according to the date of the death.

It indicates the number of deaths in Florida peaked two weeks ago and now is declining. 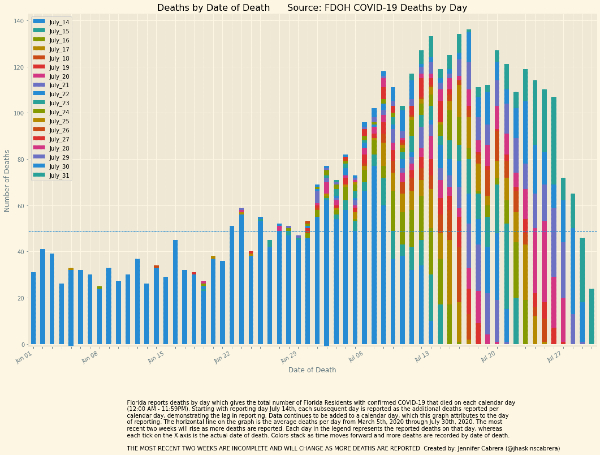 Dr. Scott Atlas, a Hoover Institution senior fellow and former chief of neuroradiology at Stanford Medical Center, confirmed the data shows that even in Texas, Florida and Arizona, "the trends are stable or even coming down."

He said in an interview July 23 with Fox New's Laura Ingraham he is "cautiously optimistic," noting the length of stays in hospitals are only one third compared to April.

"Mortality of people entering the hospital is only one half. We're doing less people need an ICU, less people who are immunizing need a ventilator," he said. "We have better drugs now with a much better handling of how these patients should be treated. We have younger patients, lower risk, getting almost all the cases, not the high-risk people."

Noting that relaxation of the lockdown will produce more cases, he emphasized you don't "eradicate a virus by locking down."

He said that while there are isolated hospitals extended in capacity, "there is absolutely no reason to panic here."

Atlas emphasized even people who haven't been infected with the novel coronavirus, SARS-CoV-2, could be immune.

He cited studies from Sweden's Karolinska Institute and Singapore that took blood from people from its cousin, SARS-CoV-1, and 17 years later there is indication that that blood still has an immune response.

The latest figures in Sweden, which avoided a full lockdown, indicate the country is rapidly bringing the coronavirus under control, Bloomberg News reported. The Health Agency of Sweden said that since a peak in late June, the infection rate has fallen sharply, with the curves for the seriously ill beginning to approach zero.

State epidemiologist Anders Tegnell said that with the numbers diminishing, "we see no point in wearing a face mask in Sweden, not even on public transport."