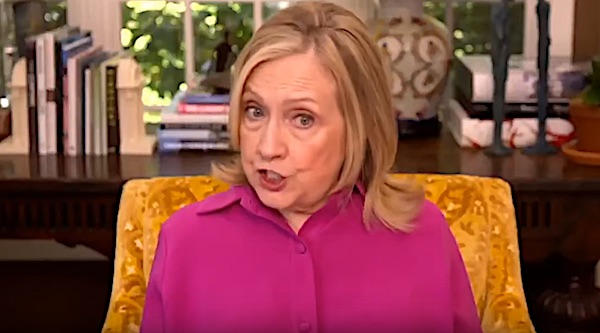 A Congress member who will address the Republican National Convention Wednesday night charges Democrats are building a narrative that the results of the 2020 presidential election will be illegitimate if President Trump wins.

Several prominent Democrats already have claimed that the military will have to escort Trump out of the White House if he loses. This week, the rhetoric was pushed to new heights by Hillary Clinton's advice that Joe Biden "should not concede under any circumstances."

U.S. Rep. Dan Crenshaw, R-Texas, in a "Fox & Friends" interview, called the notion that Biden should not concede "eerie."

Clinton said in an interview on Showtime's "The Circus" she thinks the election "is going to drag out, and eventually, I do believe [Biden] will win, if we don't give an inch and if we are as focused and relentless as the other side is."

During the 2016 race, she claimed Trump would not accept the results of the election if she won.

Clinton said she expects the 2020 race to be close and asserted Republicans are trying to tamper with the results.

Democrats are going to require "a massive legal operation," she said, "and I know the Biden campaign is working on that."

Crenshaw reacted: "How bold she is with just laying out their plan like that. And we all know that's the plan, right? Create as much chaos around elections as possible."

He said Democrats have "started to build a narrative that if Donald Trump gets elected it will be illegitimate, and now they’re laying out their plan."

The legitimacy of the vote has been complicated by Democrats' push for universal mail-in voting, which President Trump argues opens the door to fraud. He has cited problems in New York and Nevada elections as examples.

"If we're all being honest and got a bunch of problem solvers in a room and say, ‘We want an election that is verifiable and secure so we all know that our vote counts,’ obvious elements of that is in-person voting and voter I.D.," Crenshaw said. "Everybody would agree on those common-sense elements so you should find it very suspicious that these are the things that Democrats fight against the most.

"It's very, very strange and it's because they want to create chaos in the elections,” he said. “They want to be able to tinker with the chaos and claim victory even when they didn't win."