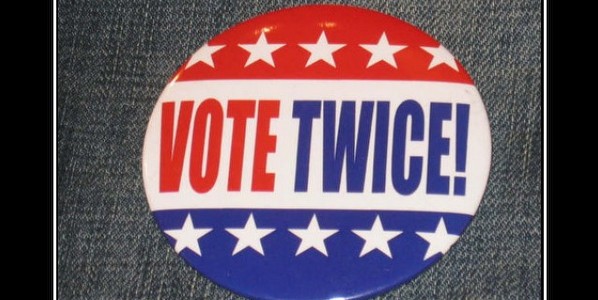 A new report from New York Post reveals that an expert on fraud in mail-in ballots says it "is no myth."

The report reveals that a "top Democratic operative" whose name was not included in the report talked about the problem with vote fraud, especially with mail-in ballots – and how he's been successful at it for years.

The issue has turned into a battleground in 2020 because Democrats are pushing for mail-in ballots nationwide – or everywhere they can get them short of a national program. They are claiming that the coronavirus pandemic makes mail-in-voting better.

President Trump, however, has criticized the proposals, citing the possibility of fraud.

In fact, fraud in a mail-in vote in New Jersey recently triggered a re-do of the whole election, because of that fraud.

The "political insider" told the Post "on condition of anonymity because he fears prosecution," that fraud actually "is more the rule than the exception."

SPECIAL IN-DEPTH REPORT: How Democrats plans to steal the 2020 election

The report said, "His dirty work has taken him through the weeds of municipal and federal elections in Paterson, Atlantic City, Camden, Newark, Hoboken and Hudson County and his fingerprints can be found in local legislative, mayoral and congressional races across the Garden State. Some of the biggest names and highest office holders in New Jersey have benefited from his tricks, according to campaign records The Post reviewed."

The tipster said 500 votes sometimes "could be enough to flip states."

The Post said it "confirmed" the identity, rap sheep and career as a "consultant" to campaigns.

He told the publication he "not only changed ballots himself over the years, but led teams of fraudsters and mentored at least 20 operatives in New Jersey, New York and Pennsylvania — a critical 2020 swing state."

He said of the potential for fraud, "This is a real thing."

The report cited procedures in New Jersey, where a mail-vote packet includes a return envelope, a certificate of mail in voter, and the ballot.

The "insider" said there are no security features on the ballot, so he would just make copies.

Envelopes, however, have to be collected from voters, and the insider said his operatives would go from house to house to convince voters to let them mail completed ballots, and then they would replace the voter's ballot with one of their own.

"You have a postman who is a rabid anti-Trump guy and he’s working in Bedminster or some Republican stronghold … He can take those [filled-out] ballots, and knowing 95% are going to a Republican, he can just throw those in the garbage," the insider told the Post.

Another path includes "hitting up assisted-living facilities and 'helping' the elderly fill out their absentee ballots was a gold mine of votes," the report said the insider explained.

The "helpers" simply fill out ballots for seniors.

The Post quoted Hans von Spakovsky, a senior legal fellow at Heritage, who said, "There is nothing new about these techniques. Everything he’s talking about is perfectly possible."