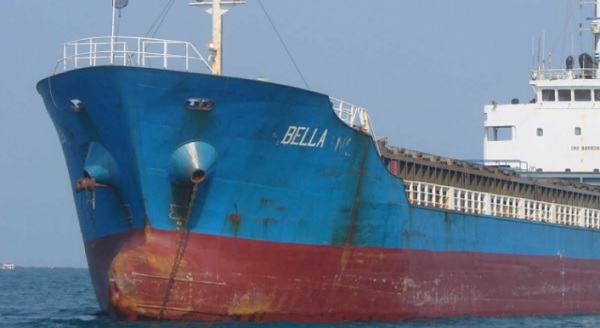 One of four ships being used by Iran to ship oil to Venezeula. (DOJ image)

The U.S. government announced on Friday it has seized more than 1.1 million barrels of Iranian oil on four ships bound for Venezuela.

The move was taken against the shipments from the Islamic Revolutionary Guard Corps, which is a designated foreign terrorist organization, according to the Department of Justice.

It is the government's largest-ever seizure of fuel shipments from Iran, the DOJ said.

The actual work on the seizure had started a month ago, when the U.S. filed a legal complaint seeking an order forfeiting all petroleum-related product cargo aboard the four foreign oil tankers, the Bella, the Bering, the Pandi and the Luna.

The goal was the disruption of the multimillion dollar fuel shipment by the IRGC, which would have produced revenue for the Iranian extremists.

The petroleum now in the possession of the U.S. totaled 1.116 million barrels. The current price is about $42 a barrel.

The DOJ noted that after the forfeiture order was enforced, "Iran's navy forcibly boarded an unrelated ship in an apparent attempt to recover the seized petroleum, but was unsuccessful."

The DOJ explained that there now will be court hearings on the actually ownership of the oil, but funds successfully forfeited "with a connection to a state sponsor of terrorism" can be used for the United States Victims of State Sponsored Terrorism Fund.

Investigators in Colorado Springs and Minneapolis continue to work on the case, which is being handled by the National Security Division and the U.S. Attorney's Office for the District of Columbia.