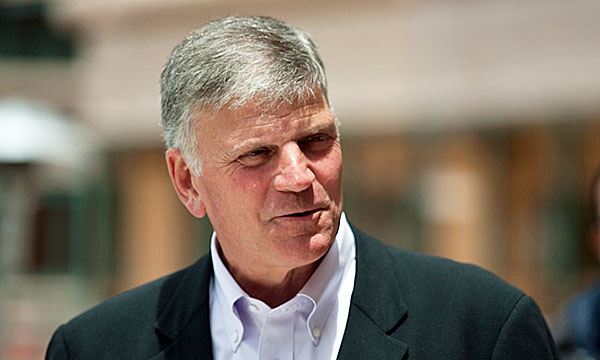 Evangelist Franklin Graham says he's worried about America's future if the nation, as the Democrats largely did this week,  takes God "out of government and public life."

Some of the sessions at the Democratic National Convention removed "under God" from the recitation of the Pledge of Allegiance. And there was a general lack of acknowledgement of God in the speeches.

Graham, the CEO of Samaritan's Purse and the Billy Graham Evangelistic Association, wrote on Facebook:

In watching some of the Democratic National Convention on television this week, it has been interesting to see the absence of God. I don’t believe America’s finest hours will be in front of us if we take God out of government and public life. It is God who set the standards we are to live by.

It is God who said, “You shall not murder.”

It is God who said, “You shall not steal.”

It is God who said, “You shall not commit adultery.”

It is God who said, “Honor your father and your mother”

It is God who said, “Remember the Sabbath day, to keep it holy.”

It is God who said, “You shall not bear false witness against your neighbor.”

It is God who said, “You shall not take the name of the Lord your God in vain, for the Lord will not hold him guiltless who takes His name in vain.”

It is God who said, “You shall have no other gods before Me.”

It is God who said, “You shall not make for yourself a carved image—any likeness of anything that is in heaven above, or that is in the earth beneath, or that is in the water under the earth; you shall not bow down to them nor serve them. For I, the Lord your God, am a jealous God, visiting the iniquity of the fathers upon the children to the third and fourth generations of those who hate Me, but showing mercy to thousands, to those who love Me and keep My commandments.”

"Under God" was left out of the Pledge of Allegiance at least twice at the beginning of DNC public meetings.

CBN reported there was no verbal resistance to the omission of "under God" by the moderator for the DNC's Muslim Delegates & Allies Assembly, AJ Durrani. DNC Chairman Tom Perez, Sen. Bernie Sanders, I-Vt., and Muslim Rep. Rashida Tlaib. D-Mich., were among the featured speakers.

At the LGBT Caucus Meeting, DNC delegate Marisa Richmond, who identifies as transgender, paused as she omitted "under God" from her recitation. She was holding both an American flag and a gay pride flag.

NEW! Democrats leave out, "Under God" from the Pledge of Allegiance at the #DemocraticNationalConvention Muslim Caucus meeting this week. Watch delegate AJ Durrani skip it. Featured speakers at the event were @BernieSanders @RashidaTlaib & @TomPerez @realDonaldTrump pic.twitter.com/Ra4SX2cqNy

CBN noted it wasn't the first time Democrats have been criticized for eliminating God at their convention. In 2012, the DNC removed the words "God-given" from their platform.

Earlier this month, Just the News reported, President Trump charged that Joe Biden is "against God."

"He's going to do things that nobody ever, would ever think even possible because he's following the radical left agenda: Take away your guns, destroy your Second Amendment, no religion, no anything, hurt the Bible, hut God. He's against God. He's against guns. He's against energy, our kind of energy," Trump said about Biden.

Courts repeatedly have rejected attempts to remove "under God" from the Pledge.