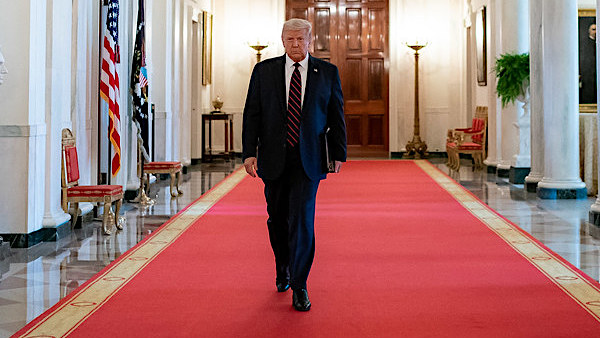 President Trump made it clear from the beginning of his term that American deals with Beijing no longer would be one-sided, benefitting mostly the Chinese Communist Party.

Now a military expert is urging the free world to unite against China's expansionist agenda and make stopping the communists the top foreign policy objective.

Lawrence A. Franklin, who served as Iran desk officer under Secretary of Defense Donald Rumsfeld, cited China's recent transgressions in a column for the Gatestone Institute.

"The theft of $600 billion of U.S. intellectual property each year; Beijing's malignant cover-up of the Covid-19 virus; the Communist regime's attempts to blind U.S. airmen with lasers; constructing military islands in the South China Sea, and last month sending a massive fleet of 250 Chinese fishing vessels near the Galapagos Islands off the coast of Ecuador," he said.

The military containment "of Chinese expansionism and Communist Party Chairman Xi Jinping's stated goal of world domination needs to be the highest foreign policy priority of the Free World."

Franklin, who served on active duty with the U.S. Army and as a colonel in the Air Force Reserve, said the objective is to prevent China's aggression against independent countries in the region "and beyond."

First, he said, containment could be built in an arc from Japan's waters to Australia to the Himalayan borderlands.

"China is encouragingly vulnerable," he said. "Fourteen states share sections of China's land borders, and the Chinese already have territorial disputes with 18 countries."

He said the CCP has made clear it intends to control some 85% of the waters off China and most of the island archipelagos nearby.

"The United States needs to be unambiguously clear that it will physically block any Chinese effort to realize any baseless assertions of Chinese sovereignty," he said.

"For the U.S. to secure the endorsement of the Archipelago of Southeast Asian states, they first must be certain that the U.S. commitment to defend their sovereignty is unequivocal and permanent," Franklin wrote.

"Given the many examples of China's aggressive behavior toward its neighbors, and with Taiwan now being openly threatened as well, another U.S. option, already undertaken, to lend substance to the military wall against China, was to send more U.S. military ships to the region," he said.

On the diplomatic side, Australia might be persuaded to hold a regional summit.

And bilateral agreements for defense commitments could be linked to multinational groups, he said.

"Countries could also be enjoined to cancel all commercial activity with China. Why fund one's enemy and make him stronger? This program functioned well in the Free World's 'Cold War' with the Soviet Union."

An anchor for the Chinese state CCTV claimed that the "U.S. fights for greed and arrogance" but that "China will fight for a new world."

Franklin commented: "It certainly will – if we let it."