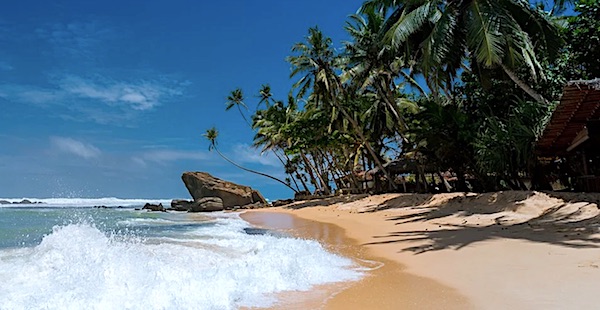 Three mariners were rescued from a remote Pacific island after a helicopter saw their message – an enormous “SOS” written in the sand.

The sailors, who were headed to the Micronesian island of Pulap, had been missing since Friday after their boat ran fuel and drifted off course in the middle of Micronesia, a nation consisting of thousands of islands and atolls, the Associated Press reported.

Both the American and Australian militaries sent out crews in search of the missing sailors, the U.S. Coast Guard said in a statement Monday.

As one American helicopter finished its search Sunday, one of the crew members on board saw the message in the sand, and the tattered vessel on the beach of Pikelot, a minuscule uninhabited atoll, AP reported.

“That’s when we looked down and saw an island, so we decide to check it out and that’s when we saw ‘SOS’ and a boat right next to it on the beach,” said Lt. Col. Jason Palmeira-Yen, who was piloting the aircraft.

Three #sailors rescued from remote island thanks to '#SOS' message on beach#Micronesia pic.twitter.com/2ywXYrWGvS

Once rescued, the Coast Guard realized that the mariners had drifted over 100 miles from their departure point on Puluwat, another Micronesian island, The New York Times reported.

An Australian crew delivered food to the sailors after their rescue, and a Micronesian ship picked them up Monday and escorted them back to Pulap, AP reported.

Capt. Terry Morrison, who led the Australian crew in their search, said that he was “proud of the response and professionalism of all on board as we fulfill our obligation to contribute to the safety of life at sea wherever we are in the world,” in a statement from the Australian Defense Ministry.