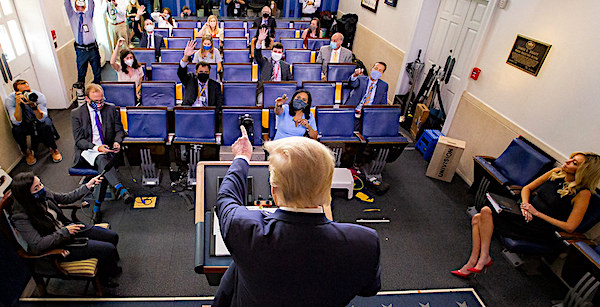 The White House press corps has great privileges, with access to the president and his top officials. They travel on Air Force One and are given prime spots at many government functions. All because, as part of the "fifth estate," they are tasked with holding government accountable and providing "we the people" with the information needed to properly govern.

But a new poll indicates nearly half of voters don't believe they are being served by the White Hous press corp, believing instead the journalists work "more on self-promotion and personal political priorities than reporting news," according to a Just the News Daily Poll with Scott Rasmussen.

Only 33% say they are "serving the public and reporting important information."

Forty-nine percent believe the press corps members are "promoting themselves and their own political agenda."

"This is consistent with a wide range of survey research showing that voters view political reporters as activists rather than journalists," Rasmussen said in the JTN report.

"And, as with just about all results concerning political media, Republicans and conservatives are more skeptical than Democrats and liberals," he said.

Rasmussen pointed out that "very liberal" voters were the only measured demographic group in which a plurality, 42%, viewed the White House press corps as serving the public.

During the Trump administration, members of the White House press corps frequently have clashed with the president, often posing questions that sound more like speeches than genuine inquiries.

This week, for example, one reporter asked Trump whether or not he regretted his "lies" to the American people.