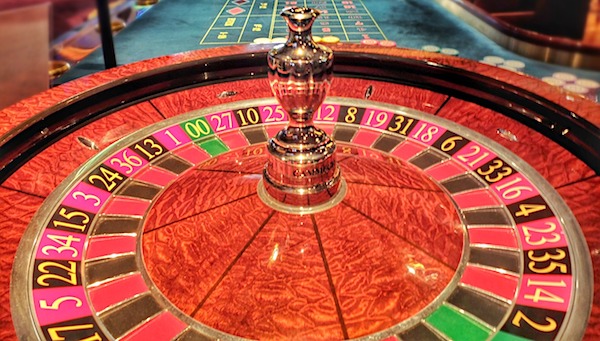 The 2020 election could be the biggest gamble in the history of the United States, starting with the huge consequences at stake but made even more uncertain because of two huge question marks at the front and back ends of the voting itself.

Think of this election as a giant roulette wheel, except instead of red or black, you are betting on red or blue — Republican or Democrat.

Here’s how a Republican sees that gamble: If the spinning ball falls into a red slot, you get four more years of Donald Trump appointing conservative judges, empowering minorities through a strong economy, negotiating peace in the Middle East and fighting back against unconstitutional abuse of power represented by James Comey, John Brennan and James Clapper. If the election result comes up blue, you get four years of President Kamala Harris — oops, I mean Slow Joe Biden — grabbing power back for the entrenched elites while at the same time weakening our economy, opening the door to illegal immigrants, raising taxes to bail out failed cities and states, and encouraging lawlessness by attacking the police.

Democrats, of course, would turn that equation on its head — worrying about four years of unregulated tweeting from Putin-puppet Trump and imagining a new era of hope and prosperity under the Biden-Harris ticket.

Either way, only a fool would call the winning color just when the wheel is set in motion, yet the polls and pundits have settled on Democrat blue as the prohibitive favorite, even before the two parties’ virtual conventions have been held. How can that be? We haven’t had a single debate yet, and thanks to COVID-19, we haven’t even seen any real campaigning for votes. When President Trump held a test rally in Oklahoma, he was roundly criticized for campaigning during the pandemic, and then mocked for not filling the arena thanks to — yep — the selfsame pandemic.

So if the major media and the Democrats are so certain that Trump is going to lose, what do they know that you don’t? It can’t just be the polls because, as everyone knows, the polls showed candidate Trump losing badly to Hillary Clinton consistently during the 2016 campaign. Whether it’s because of bias in the polls themselves or simply because of “shy” Trump voters rejecting participation in them or actively lying to confound the results, something causes Trump to underperform in these surveys.

I’m betting that Democrats are banking on two election provisions — one long-term and one specific to 2020 — that will skew the results toward Biden. The long-term change in voting habits that could benefit Democrats is early voting. Let’s face it: Donald Trump is counting on winning the side-by-side comparison with Joe Biden. There will not be any better opportunity to highlight differences between the candidates than the three presidential debates, yet at least 16 states will allow early voting before the first debate, on Sept. 29, takes place. That means millions of votes could be locked in five weeks before Election Day, and before Joe “Big Gaffe” Biden gets to lose his train of thought, repeatedly, on a national stage.

Whether you agree with President Trump that the resulting election will be “rigged” or not, you still have to question whether there is something fundamentally wrong with encouraging people to vote before they have a chance to hear from the candidates — or from the Fourth Estate, if the press would ever do its job and fairly vet the candidates on both sides of the aisle.

Maybe Joe Biden won’t implode in the debates, maybe it will be President Trump who gets confused and starts to call God “the thing” the way Biden did back in March. But whoever starts to act like he has lost his crackers, the voters ought to be able to know it before they send in their ballots.

Of course, Democrats and their media allies have been encouraging early voting for decades, presumably on the assumption that uninformed voters will likely be safe votes for Democrats. But this year it’s more important than ever because if voters wait till Nov. 3 to cast their ballot, they will have had way too many chances to figure out that Biden is running on empty.

However, just in case even those early voters are informed enough to know that Biden wants to fundamentally transform America into a great big version of anarchist Portland or violent Chicago, the Democrats have an insurance policy.

This is where things get interesting. All-mail voting goes hand-in-hand with early voting since the ballots go out early and can be sent back early, thus contributing to the problem of voting prior to campaigning. But there is a more nefarious component to universal mail-in ballots, which President Trump has vigorously condemned.

Unlike absentee ballots or early voting, which require active participation by the voter, universal mail-in voting means that every registered voter will be sent a ballot whether they want one or not — heck, even whether they are alive or not.

Democrats argue that nothing can go wrong, but these are the same people who want to give illegal immigrants free health care and consider people throwing Molotov cocktails into federal courthouses “peaceful protesters.”

Fact of the matter is that cheating on mail ballots is child’s play. Here, off the top of my head, are four ways to monkey with the vote:

1) A hard-core Democrat union-rep mailman is collecting mail from households in a neighborhood that skews Republican. He dutifully collects the ballots left for him, but then dumps them in the trash or (smarter) burns them in his fire pit later that night.  What is the protection against this happening? Or any of the remaining scenarios below?

2) A hard-core Democrat nurse's aide making 10 bucks an hour decides to monkey-wrench the system that she thinks is exploiting her. When she collects the ballots from 120 residents in the nursing home where she works, she volunteers to drop them at the post office "to make sure they are secure," but then heads home and buries them in the backyard.

3) A pizza delivery guy enters an apartment building with a large pepperoni and leaves with a carton of blank ballots that were left in the lobby for pickup by the residents. The pizza guy happens to be a member of antifa and he has no problem filling out all the ballots against President Trump and the Republicans. Even if the fraud is discovered, it is highly unlikely that all the ballots will be disqualified.

4) A Democratic campaign aide who is working to "get out the vote" in a neighborhood with a high proportion of older people knocks on doors and offers to help voters mark their ballots. Not a citizen? No problem. That's been waived. Not sure who to vote for? How about that nice Democrat! And if you do happen to vote Republican, no problem — I will deliver it for you ... right to the Dumpster!

You can think of more on your own. It’s not that hard. But perhaps even more worrisome is the possibility that votes will not be counted on election night. Some states are allowing ballots to come in by mail for days after the official election. In some cases, the ballots need to be postmarked by Election Day, but in other cases the ballots will be sent out with prepaid postage, meaning there will be no postmark and no way to know if the ballots were mailed before or after the deadline.

Suppose the results on election night are inconclusive. Biden and Trump are both short of the majority of electoral votes needed to win, and close races are reported in Arizona, Colorado, Nevada, Minnesota, North Carolina and Michigan. Many ballots are uncounted, and it looks like the vote could drag on for weeks. Colorado and Nevada have universal mail ballots, so if either candidate needs those electoral votes for the win, they will target the states with lawyers, lawsuits, and protesters.

Imagine the chaos when peaceful protests turn into riots, and then boxes of uncounted ballots are mysteriously discovered in a county courthouse in Las Vegas. Imagine what happens when those ballots favor Joe Biden by a margin of three to one, giving him just enough votes to win Nevada’s six electoral votes and assure him of victory. Maybe for once Republicans would take to the streets and demand justice, or maybe not. Maybe they would just let Las Vegas decide what has been called the most important election in U.S. history with a coin toss.

Now, that would be a storybook ending to our tale, wouldn’t it? The biggest gamble in election history gets settled in the gambling capital of the United States. You pays your money and you takes your chance.