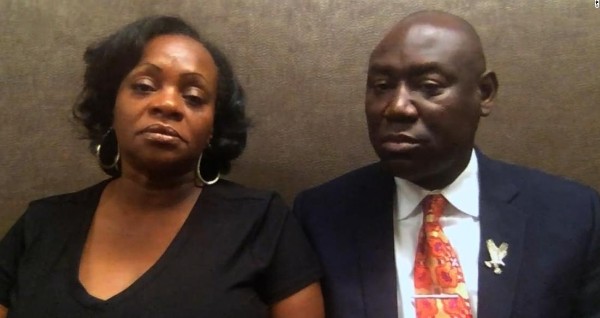 Julia Jackson, the mother of Jacob Blake, with attorney Benjamin Crump in an interview with CNN on Aug. 26, 2020 (video screenshot)

Julia Jackson, the mother of Jacob Blake, condemned the violence in Kenosha, Wisconsin, in response to the police shooting of her son and apologized to President Trump.

"My family and I are very hurt and quite frankly disgusted. And as his mother, please don't burn up property and cause havoc and tear your own homes down in my son's name," Jackson said in an interview with CNN's Don Lemon, The Blaze reported.

Two people were killed late Tuesday as businesses were burned and looted a third consecutive night in city, which is on Lake Michigan between Milwaukee and Chicago.

Lemon asked whether she had a message for politicians.

"For our president, Trump: First I want to say a family member and I don't know if it was heard or not said something that was not kind. She is hurting and I do apologize for that," she said.

"Our outburst does not reflect our behavior. And then also, for President Trump: I'm sorry I missed your call because had I not missed your call, maybe the comments that you made would have been different," Jackson said.

Jackson told Trump: "I'm not mad at you at all. I have the utmost respect for you as the leader of our country. Like I said before and I'm not saying this to him directly: We should always get the details from the right source before we start throwing bricks."

Benjamin Crump, who represented the families of Trayvon Martin and Michael Brown in police-involved shootings that launched the Black Lives Matter movement, said Blake is paralyzed as a result of the shooting.

Both Martin and Brown were found to be the aggressors by juries. An investigation by Barack Obama's and Eric Holder's Justice
Department confirmed the verdict in the Brown case. And a third investigation, that recently concluded, came to the same conclusion.

Jacob Blake’s mom on violence in Kenosha: "My family and I are very hurt. And quite frankly disgusted. And as his mother, please don’t burn up property and cause havoc and tear your own homes down in my son’s name. You shouldn’t do it. … it’s just not acceptable.” pic.twitter.com/T00Fg5MOvj