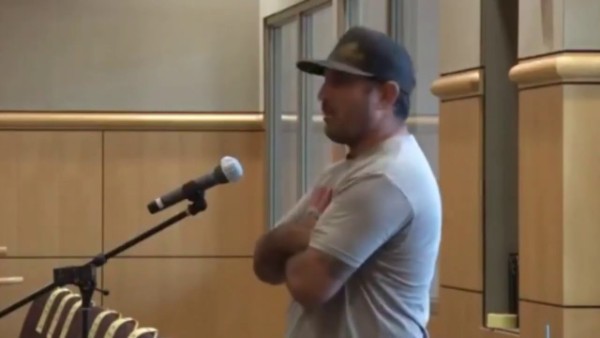 Shasta County resident Carlos Zapata speaks to the Shasta County Board of Supervisors on Aug. 11, 2020 (screenshot)

A military veteran business owner in Northern California lit into his county's leaders at a board of supervisors meeting, warning that restrictions due to the coronavirus pandemic are threatening the lives of his family and many others.

"This is a warning for what's coming; it’s not going to be peaceful for much longer," Carlos Zapata told the Shasta County board in Redding, California, on Aug. 11.

Zapata, who said the families of business owners who have been shut down are "starving," was one of about 80 citizens who spoke at the meeting.

Redding.com reported that after the meeting, officials in Shasta County, which tends to vote Republican, blamed Democratic Gov. Gavin Newsom for the restrictions.

"Our local health officer has not made any restrictions over and above what the state of California has, so we are doing all that we can to keep the county as open as possible," said Donnell Ewert, the county's Health and Human Services Agency director.

At the meeting, nevertheless, Zapata directed his animus to the county board.

"I'm pretty appalled at what's going on. At first we sat as concerned citizens, and we all wanted to best figure out how to navigate our way through this COVID thing," he said.  "As we realized that it's not as quite as dangerous as we thought it would be, I was absolutely appalled at the cowardice — and you guys are sitting here with your masks on — I don’t blame you for wearing masks because I would be hiding my face if I was you for what you’re doing," he said.

"I'm a business owner and I'm telling you, our families are starving," Zapata continued. "You guys can sit here with your jobs — you’re gonna sit here and get paid to fall asleep in your chair like that gentleman’s doing behind his mask right there," said Zapata.

He then issued a warning.

"Right now we're being peaceful, and you better be happy we're good citizens, that we're peaceful citizens, but it's not gonna be peaceful much longer. And this isn’t a threat — I’m not a criminal, I've never been a criminal but I’m telling you real good citizens are going to turn into real concerned and revolutionary citizens real soon," he said. "And nobody else is gonna say that. I’m probably the only person that has the balls to say what I’m saying right now.

Stop what you’re doing & listen to this man. He speaks for millions of fed up Americans.

"We’re building and we're organizing and we’ll work with law enforcement or without law enforcement," he said. "but you won’t stop us when the time comes because our families are starving!

Zapata said he went to war for the United States and is willing to fight again to save the country.

"If it has to be against our own citizens, it will happen," he said. "And there's a million people like me, and you won't stop us.

Zapata said he knows six veterans who have committed suicide after losing their jobs.

"How do you feel about being complicit and perpetuating that -- the greatest hoax ever perpetuated on the American people?"