Why would anyone want to live in a city? Especially now?

It seems every amenity that attracts people to urban areas has disappeared. Jobs, culture, theater, shopping, the arts, museums, restaurants, coffee shops, even the urban "energy" is gone from so many places.

Take New York City as an example. "I love NYC," mourned entrepreneur James Altucher in a poignant piece called "NYC Is Dead Forever … Here's Why." "When I first moved to NYC, it was a dream come true. Every corner was like a theater production happening right in front of me. So much personality, so many stories. Every subculture I loved was in NYC. I could play chess all day and night. I could go to comedy clubs. I could start any type of business. I could meet people. I had family, friends, opportunities. No matter what happened to me, NYC was a net I could fall back on and bounce back up.

"Now it's completely dead. 'But NYC always bounces back.' No. Not this time. 'But NYC is the center of the financial universe. Opportunities will flourish here again.' Not this time. 'NYC has experienced worse.' No it hasn't. A Facebook group formed a few weeks ago that was for people who were planning a move and wanted others to talk to and ask advice from. Within two or three days it had about 10,000 members."

Altucher is merely voicing what's being called "a mad rush for the exits as New York City goes down the tubes."

It's not just NYC, of course. In the last few months, there has been a frenzied rush away from urban areas, especially since anarchy is now coming to quiet residential neighborhoods (such as here, here and here). People are leaving cities in droves. Can you blame them? Consider just a few headlines:

• "Chicago Store Owner Spent $300,000 To Reopen Destroyed Business After Riots, Only For It To Be Struck Again By Vandals." (This link also includes a heartfelt letter to Mayor Lightfoot to bring back law and order.)

• "Hollywood's Apocalypse NOW: Rich and famous are fleeing in droves as liberal politics and coronavirus turn City of Dreams into cesspit plagued by junkies and violent criminals." (Quoting a man who owns a moving and storage company: "Liberal politics has destroyed this city. The homeless encampments are legal, and there's nothing the police can do. White, affluent middle-class folk are getting out. People don't feel safe anymore." This article's author pins the blame on Trump and condemns "white flight" because it is, of course, racist to flee cities plagued with violent crime.)

• "Seattle Defunded Police. Now Businesses Are Leaving, and Rioters Still Aim Explosives at Cops." "When Antifa rioters turn the streets of Seattle into a war zone, they make the city unsafe for businesses – even the businesses owned by racial minorities, the people the rioters are ostensibly trying to help. … Recent events may prove to be the death knell of a great American city."

Headline after headline, article after article, link after link confirms this mass exodus. The financial hardships from pandemic shutdowns and the ongoing anarchy by Antifa and BLM have turned cities into movie plots ("Escape from [Insert Your City Here]").

When I decided to write this column about urban flight, I started gathering links to relevant news stories as I stumbled across them. I ended up with so many – dozens – that I couldn't even begin to use them all in a 1,000-word column. (I posted them here.)

Because, you see, the general consensus is that cities are in trouble. Interestingly, the cities experiencing the most trouble are blue cities run by Democrats, which are locked in a death spiral, even as they embrace every tactic that will push them downhill even further. Perhaps I'm wrong. If anyone knows about red cities where the unrest is similarly disturbing, feel free to post about it in the comments below.

Now give me one good reason – just one – why any business (everything from Macy's down to Joe Bob's Deli) should continue to operate in these urban hellholes. 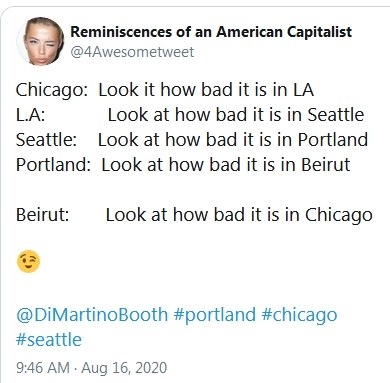 According to some real estate experts, this urban exodus will last two years. To which I ask: Really? Things will be better in two years? Will the homeless crisis be solved in two years? Will crime go down by 2022? Will drug dealing be curtailed? Will property taxes be reduced? Will Antifa and BLM disband? Will the riots cease? Will all the restaurants reopen? Will office buildings fill back up? Will the police be fully funded once more?

Urban anarchy is the last straw for many. Apparently, the mainstream media believe if they ignore the riots by refusing all coverage, then they'll just go away. But they aren't going away, and the people living in these cities have to grapple with them, day after day, night after night. No wonder they're leaving. I don't blame them.

What will become of cities? "Socialists will make demands, but they will be ignored because they caused all the anarchy during their 2020 liberal temper tantrums," notes retired police officer Joseph Ragonese. "Large Democratic cities will not be rebuilt at taxpayer expense, at least not for some time to come. Socialists will be left to wallow in the pigsties they created."

"The socio-economic implosion of the city has allowed the woke Hollywood crowd to finally realize decades of liberal policies are, in fact, a failure," adds ZeroHedge. "Now, the same elites who championed liberal policies are abandoning ship and moving to suburbia."

And here's the thing: More and more, people are discovering they don't need cities. "Most important among these [factors] is the newfound ability of many companies and their employees to work pretty much wherever," observes Michael McKenna with the Washington Times. "The coronavirus, and the government's disastrous response to it, has provided a beta test of working from home. … Now stir in a generous helping of public sector unions (police, teachers, clerks) who resist any attempts to reform any system. Add in mayors – in places as disparate as Richmond, New York City, and Minneapolis – seemingly indifferent to property destruction.

"Taken together – disease, violence, sclerotic or even hostile governments, the possibility of more time, space and safety elsewhere – it becomes very difficult to see why anyone who has the means and ability to move from the cities would not. Most of these cities have been Democratic strongholds for a generation or more. When democracy devolves to one-party rule, when the ballot box fails to provide remedies, people will vote with their feet."

Why would anyone want to live in a city, especially now? I don't know. Perhaps someone else can answer that question.