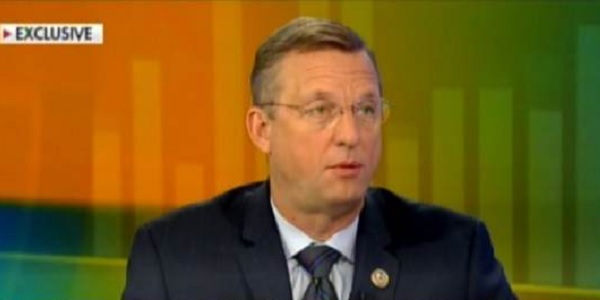 More than a dozen members of Congress, including U.S. Doug Collins, R-Ga., have written to Attorney General William Barr asking for an investigation of the George Soros-sponsored prosecutor in St. Louis who insisted on filing charges against a husband and wife who defended their private property from Black Lives Matter "protesters."

The letter explained that in recent weeks "peaceful protests have spiraled into deadly and destructive riots" and local officials have "tolerated" violence and deadly mobs.

Under those circumstances, the letter explained, Mark and Patricia McCloskey in St. Louis "exercised their Second Amendment right in self-defense, as they were threatened by violent protesters who made menacing remarks and trespassed on their private property."

They were holding guns, one of them inoperable, while facing the threats.

The result of the conflict, however, was that the prosecutor, Kim Gardner, confiscated the McCloskeys' weapons and charged them with felonies.

"This decision is not only an abuse of power, it is a reckless assault on all citizens' right to bear arms," the members of Congress wrote. "As police are being told to stand down by feckless and fearful politicians, upstanding citizens across the nation have watched their neighborhoods and communities burn to the ground."

The letter continued, "Criminals should live in fear of prosecution, not innocent Americans defending themselves, their families, and their property. The prosecuting attorney's actions appear to be driven more by an antigun, not anticrime, agenda. This is a devastatingly chilling signal to the more than 2.5 million Americans who recently bought guns for the first time to protect themselves and their families against the unmitigated lawlessness sweeping across our land."

The letter seeks an investigation of Gardner, and "every rogue prosecutor who fails to uphold the rule of law and secure the rights of our citizens."

"Americans deserve to know exactly how public officials are abusing their power by harassing individuals exercising their rights and failing to enforce laws against trespassing, destruction, and violations of private property."

KSDK in St. Louis revealed earlier that the handgun being held by Patricia McCloskey was inoperable when police confiscated it, but they had a crime lab repair it so that it was "readily capable of lethal use" and then Gardner could file an additional charge against her.

Further, reports revealed just last week that Gardner has "jetting around on someone else's dime" but failed to disclose the special donations as required by law.

Some of the trips were paid for in full or in part by an organization that says it supports progressive prosecutors, Fair and Just Prosecution.

"The station's sources said Gardner's travels were "prolific and problematic," because "she was unreachable on trips, making it difficult to get decisions made." Among the issues affected by Gardner's absences were budgets, grants and personnel issues such as hiring and firing.

The Fair and Just organization confirmed some of its funding comes from an organization related to Soros, the far-left billionaire activist who also contributed to Gardner's political campaign.

Missouri Attorney General Eric Schmitt is trying to have the charges brought by Gardner against the McCloskeys dismissed, telling "Fox News @ Night that the right to self-defense is "deeply rooted" in the Constitution, and the state has a "castle doctrine" upholding broad rights for people to protect their lives, families and homes."

Missouri Gov. Mike Parson also said he would consider pardoning the couple should they be charged.

In a video posted to social media, peaceful protesters in St. Louis calling for police reforms walked past a couple brandishing firearms as they were ordered to stay away from the couple’s home https://t.co/bYl06iAiTo pic.twitter.com/wOZ1Wr3yac