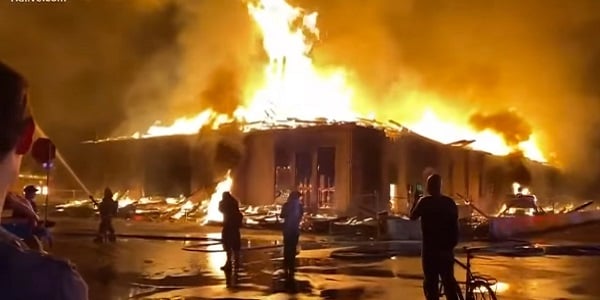 Business owners in Minneapolis who have been plagued by race riots are facing yet another obstacle to reopening.

It's the city's rule against metal security shutters, according to the Foundation for Economic Education, or FEE.

The roll-down shutters that prevent break-ins are common in many urban centers.

At least 1,500 Minneapolis businesses have been destroyed in rioting triggered by the death of George Floyd.

FEE noted countless businesses "were looted, vandalized, or burned to the ground, and multiple people were killed." Riots broke out again this week based on a false report of a police shooting.

"In a jarring example of how deadly this chaos was, police found a charred body in a Minneapolis pawnshop days after the riots died down. Arsonists had murdered a man, possibly without even realizing it," the report said.

But business owners who now must make security a priority are running up against the regulation.

Should Minneapolis rescind its ban on metal security shutters so businesses can be protected?
97% (242 Votes)
3% (7 Votes)

"Times have changed," Wolf told the Star-Tribune. "I am going to spend millions of dollars to bring my business back, and I don't want to buy 20 window panes and have them broken the first day. Property owners should have options on how to protect themselves."

The city allows a request for a variance but has never has granted one for a shutter.

FEE noted some business owners are simply leaving their buildings boarded up.

That's predictably creating "more blight" due to a law that is intended to minimize blight.