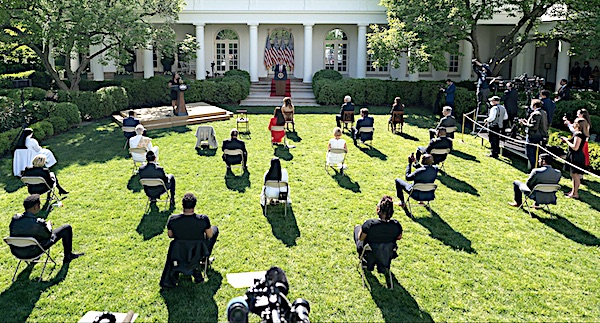 From the beginning of time, humans have used mythology to make sense of a chaotic natural world. Sir G.L. Gomme dubbed myths “the science of a pre-scientific age.” Folklore provided pre-scientific people a comforting sense of control over nature. To address dry spells, they deployed rain dances. Sunless stretches hindering crops prompted offerings to Helios. Then, our ancestors sat back and waited. The rains always came. The sun always reappeared, validating their “wisdom,” the illusion of control reinforced.

Thanks to science, we know this was pure superstition. Though the same outcomes would have occurred had the tribe taken no action, the tribe leader would still have received credit or blame from his constituents. Similarly, today’s politicians race to take credit -- or place blame -- for COVID-19 “results.” Do politicians really control these outcomes, or are they simply exploiting our ingrained tendencies?

When China first deployed lockdown in January to “defeat COVID-19,” The Washington Post approvingly quoted a Georgetown University professor as saying, “The truth is those kinds of lockdowns are very rare and never effective…”

In March, Imperial College London's dire projections influenced the White House, but a careful reading of the advice contained in the Imperial College report reveals that its authors knew lockdown alone could not eliminate any infections, only delay them: “The more successful a strategy is at temporary suppression,” it stated, “the larger the later epidemic is predicted to be in the absence of vaccination, due to lesser build-up of herd immunity.”

Centers for Disease Control and Prevention pandemic planning documents state non-pharmaceutical interventions such as social distancing are ineffective once a disease infects 1% of a region's population. Literature on this subject is unanimous worldwide. According to the European Centre for Disease Prevention and Control:

“There are no historical observations or scientific studies that support the confinement by quarantine of groups of possibly infected people for extended periods in order to slow the spread. It is hard to imagine that measures like those within the category of social distancing would not have some positive impact by reducing transmission of a human respiratory infection . . . However, the evidence base supporting each individual measure is often weak.”

Decades of evidence corroborates this. In 1969, a group of men overwintering in Antarctica experienced a spontaneous respiratory virus outbreak during their 17th week of isolation. Similarly, COVID-19 appeared on an Argentinian naval ship on the 35th day of its voyage, following a 14-day isolation of captain and crew.

Nature always finds a way. No respiratory virus ever needed a “lockdown” to dissipate. What it needs is herd immunity, preferably sooner than later, preferably developed by the young and healthy to minimize mortality. Politicians know the disease will eventually leave, yet they strive to convince a critical mass that their actions -- modern-day versions of the rain dance -- brought about that result. They count on us behaving like renowned psychologist B.F. Skinner’s superstitious pigeons.

“A pigeon is … put into a cage. A food hopper may be swung into place … so that the pigeon can eat from it … If a clock is [set] to present the hopper at regular intervals with no reference whatsoever to the bird’s behavior, operant conditioning usually takes place. The bird tends to learn whatever response it is making when the hopper appears. The experiment might be said to demonstrate a sort of superstition. The bird behaves as if there were a causal relation between its behavior and the presentation of food, although such a relation is lacking.”

Publicly available data shows no causal relationship between government orders and COVID-19 mortality outcomes. Sweden's all-cause, per-capita mortality for 2020 is approximately 290 per million above the prior five-year average, while lockdown-loving New Jersey's is almost 1,900 per million above the prior five-year average, and Michigan's is over 700 per million. (In case you suspect Sweden “naturally” locked down on its own, mobility data reveals it didn’t.) The mainstream media does not report this. Instead, its energetic smearing of Sweden, coupled with its pseudo-scientific insistence that lockdowns do anything more than delay the inevitable, helps politicians exploit the human tendency to mythologize.

We are faced with a virus with a 997-out-of-1,000 survival rate. We have vanquished fiercer adversaries. We can rid ourselves of this plague less painfully by remembering one simple truth: neither we, nor our politicians, have control over death.

Stacey Rudin is a litigator active in the grassroots movement to preserve full-time, in-classroom education for children. You can find her work on Medium.