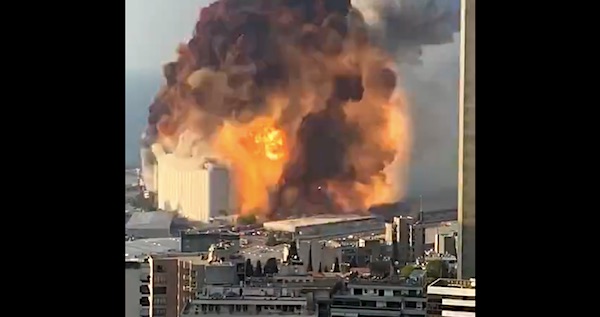 This year will be remembered for many things. One of them will be the large number of attacks and explosions of critical infrastructure in several countries. The first was Iran’s attack on Abqaiq, Saudi Arabia’s main oil processing and transit node, long viewed as the doomsday scenario of the international oil industry. Next, in July, Armenia launched several attacks on Azerbaijani military and civilian targets in close proximity to the major East-West energy corridor from Azerbaijan to Europe.  Most recently, there was the tragic explosion at the Beirut port on August 4.

New thinking is needed on how to approach the security of critical infrastructure, which takes into consideration the interplay between domestic safety and national security factors. In parallel, the national security strategy of the US and its allies needs to give increased attention to protecting critical energy infrastructure and boosting resilience to mitigate the consequences of those incidents that do occur.

Adversaries of the US and its allies are increasingly targeting civilian energy infrastructure. Disrupting energy infrastructure and supplies is attractive for several reasons. One, perpetrators of such attacks can take advantage of the lack of clarity about the cause of some of these incidents to hide their responsibility for them. This plausible deniability is enhanced by the fact that accidents can damage most energy infrastructure, due to the presence of large amounts of combustible fuel.

In addition, disruption of energy supplies combines a high impact, disrupting daily life for large swaths of the population and creating panic, with minimal loss of life, removing pressure on the US (or its allies) to respond due to the low body count. Finally, energy infrastructure represents an especially attractive target because today’s Western militaries rely on civilian energy infrastructure for much of their energy supply and storage, allowing adversaries to damage these forces without actually engaging them.

The US and most of its allies are more vulnerable than Russia, China, Iran and other US opponents to these attacks, since Western publics are accustomed to uninterrupted energy supplies, while U.S. adversaries frequently experience electricity disruptions and energy supply shortages.

Nor is targeting of energy and other civilian infrastructure limited to state actors. In many parts of the world, non-state militias and criminal gangs, such as Hizballah, now control energy and other critical infrastructure, such as ports, power plants, and gas fields. These non-state actors also possess, trade, and transit hazardous materials. When related calamities take place, such as Beirut, they should not be categorized as mere “accidents,” but a governance failure in allowing militias and gangs to control critical infrastructure and possess hazardous materials.

While market liberalization and privatization of energy production, transit, and supply have created many positive commercial outcomes, decreased government oversight has also, in many places, increased public safety risks. New policies are necessary to harness the benefits of privatization in a safer manner.

With urban populations growing around the world, accidents have greater impact than in the past. Moreover, aging infrastructure is a common problem in many countries and a growing threat to civilian populations and militaries as a source of energy supply disruptions.

Addressing the security challenges to energy infrastructure requires cooperation between commercial entities, domestic safety institutions and national security agencies. To prevent further disasters, like Beirut, these events should be studied as part of a series of critical infrastructure incidents. A systematic study of these incidents will produce better policy responses and should be included in the next U.S. administration’s national security strategy.

Alan Howard, Dr. Dan Nussbaum, and Dr. Brenda Shaffer are faculty members at the US Naval Postgraduate School in Monterey, California, in its Energy Academic Group, which provides defense-focused graduate education, including classified studies and interdisciplinary research. They focus on teaching and research on energy security, operational energy for the US military, and protection of critical energy infrastructure in the US and abroad. Dr. Shaffer is also a Senior Advisor for Energy at the Foundation for Defense of Democracies, a think tank in Washington, DC.