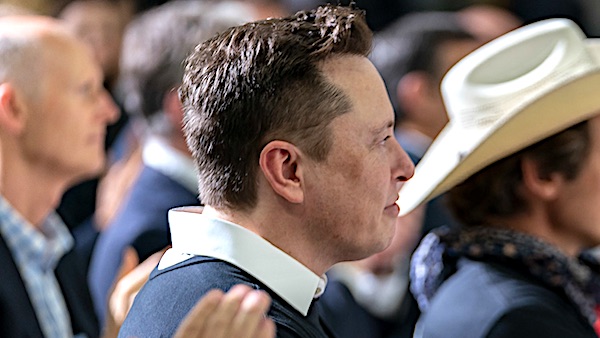 The China virus isn't the only issue dominating the news these days. America's clash with China over national security concerns is also grabbing national headlines, and it just might turn into an all-out cold war.

It's not just about imports, exports, trade deficits, and trade surpluses like the media presented it for much of the two years before the pandemic. It's about our national security as much or more as it is about our economic security.

It follows then that America, as a nation, needs to unite behind the fight to ensure that America doesn't lose its competitive edge to China economically, technologically, and militarily. And we need to identify any potential threats – foreign or domestic – to our cause to unite behind the fight with China that may be a long, drawn-out struggle and will require a unique, determined, will to win.

Billionaire Elon Musk and his actions with China on behalf of Tesla, Inc. appear to be a possible cause for concern.

Tesla isn't the only car company that has engaged China to produce there and promote sales there. All car companies have. But some of the things Mr. Musk says and does are downright disturbing.

On June 11, 2020, Fortune published an article titled "Tesla's love affair with China" detailing how Tesla secured $1.6 billion in loans from China-based banks for its Shanghai factory so that almost everything from permits to regulations could be put on the fast track for approval.

Maybe that's why Musk says things like, "China rocks, in my opinion," …and "I love China very much and am willing to come here more," emphasizing how impressed he was by the efficiency and speed of China's development. "The energy in China is great," he continued. "People there – there's like a lot of smart, hardworking people. And they're really -- they're not entitled, they're not complacent, whereas I see in the United States increasingly much more complacency and entitlement…"

When Elon Musk was forced to close his Fremont, California, plant due to the coronavirus, however, he argued with the local sheriff and police, then ultimately sued Alameda County before defying local officials in reopening the plant. Prior to that, Chinese Premier Li Keqiang had already offered to make Mr. Musk a permanent resident of China.

But Elon Musk wasn't the least bit combative when Tesla's factory in Shanghai was closed due to the coronavirus lockdowns. China even helped Tesla gain access to 10,000 masks and provided dormitories for Chinese workers.

Chinese President Xi Jinping, in a three-and-a-half-hour speech in 2017, said, "China has stood up, grown rich, and is becoming strong; … and that the banner of socialism with Chinese characteristics is now flying high and proud for all to see. No one should expect us to swallow anything that undermines our interests."

Make no mistake. China is rich in large part because they now have trillions of U.S. dollars that used to be ours. It used to be our money before we sent it to China to buy their cheap goods, thinking free trade and globalization were the greatest things since sliced bread. And now that over-accumulation of dollars in China is cause for concern with a communist nation that is challenging us to become the world's number one superpower.

The FBI has identified China as America's most prominent law enforcement threat. FBI Director Christopher Wray once informed a conference that there are about 1,000 open investigations regarding Chinese technology theft and that Beijing intends to steal U.S. technology by "any means necessary."

It is essential to keep in mind that Elon Musk is involved in more than just the development of automobiles. His company SpaceX has received billions of dollars from NASA, and it is now widely-known that SpaceX and Tesla often work closely together. In April 2020, an SEC filing showed that SpaceX purchased $600,000 worth of car parts made by Tesla.

Since the U.S. finally ended its dependence on Russian rockets to launch American astronauts into space, we should closely monitor Elon Musk's ties to China to safeguard our national security. It is never a good time to cozy up to communists. We've seen and learned from that time and time again. And now is not the time to re-learn that famous saying, "Those who do not learn history are doomed to repeat it" the hard way.