I cannot imagine any good worldwide discussion that starts out with the lunchtime habits of Thai nursery school students.

Not to say that there can't be one -- say, a group of young kids in Chiang Mai decides to donate half their lunch money to feed the hungry -- but it would definitely be unusual. This wasn't the case, alas, with the Wat Khlong Toey School in Bangkok, where photos of children being placed alone in plastic boxes in order to achieve social distancing have caused a worldwide uproar.

The U.K. Independent reported on the social distancing conditions inside the school on Tuesday, noting that "[t]he kindergarten had been closed since mid-March after authorities in Thailand issued a nationwide lockdown to prevent the spread of the virus."

"The images, which were taken on Monday, show the level of health precautions taken by the Wat Khlong Toey School in Bangkok, which welcomed its 250 students back to the classroom in July," the publication reported.

From The Independant: "Two Thai pupils play behind plastic screens in separate play areas at the Wat Khlong Toey School on August 10, 2020 in Bangkok, Thailand." pic.twitter.com/7A1BviUaUH

"As well as setting up enclosed play areas, the school has set up plastic screens around the students' desks and has marked out socially-distanced boxes on the floor for pupils to stand in," the Independent reported.

The images are a stark reminder of just how far adults will go to stop children from getting COVID-19, even though they're at extremely low risk for complications from the coronavirus and there's no significant evidence yet that they're even a prominent vector of transmission.

According to the Independent, there are temperature scanners outside the school's classrooms as well as soap dispensers (that presumably remind you to sing "Happy Birthday" twice while you wash your hands).

The school was also handing out face masks to students as they entered the building -- and would, for some activities, give them face shields.

The Independent also reported on another school south of the Thai capital that required its students to self-isolate for 15 days before returning, something that surely won't be emotionally damaging to children in the slightest.

The article closed, naturally, with a quote from Tedros Adhanom Ghebreyesus, the head of the World Health Organization, warning that schools must be safe before reopening.

Students sit inside plastic cubes at the Wat Khlong Toey School in #Bangkok, #Thailand. Using strict safety procedures, the school has been open for a month and has zero new cases of #coronavirus 📷: @laurendecicca #BackToSchool pic.twitter.com/WqXZqOhs5I

"We all want to see schools safely reopened but we also need to ensure that students, staff and faculty are safe. The foundation for this is adequate control of transmission at the community," Tedros said.

You don't want to dismiss risks, but the Independent's report came on the same day CNN breathlessly reported on a 90 percent increase in reported COVID-19 cases among children. This increase, the media outlet said, was due to factors such as "increased testing, increased movement among children and a rise in infection among the general population."

"It's not fair to say that this virus is completely benign in children," said Dr. Sean O'Leary, vice-chair of the American Academy of Pediatrics Committee on Infectious Diseases.

Ninety deaths are tragic, and nothing will take away from that. However, that's still .005 percent of the roughly 165,000  deaths from COVID-19 in the United States as of Wednesday morning, as reported by Johns Hopkins University data. Furthermore, studies have shown that the chance of a healthy child dying from COVID-19 is incredibly small compared to any other age group.

Thailand, meanwhile, has had a total of 3,356 confirmed cases of the coronavirus and 58 deaths. Granted, it's a different culture with a government that tends more toward authoritarianism than anything we see in the West.

That said, The Washington Post apparently thinks this is coming here: 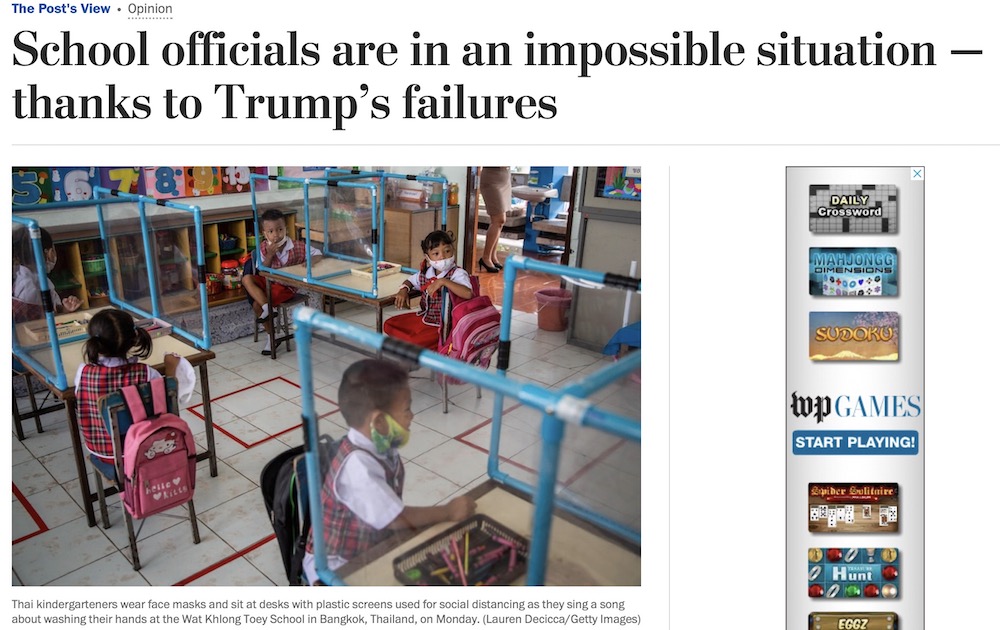 The context of this photo would have died in darkness for the reader if they didn't read the relatively fine print on the caption.

In either case, the reaction is ridiculously overblown. The emotional damage to children this will cause -- in the United States or in Thailand -- is likely a far greater long-term danger than what seems to be an infinitesimal chance they'll face serious complications from COVID-19.

Keeping children out of school isn't the answer. Neither is placing children in plastic boxes to play. We cannot countenance inhuman behavior by exaggerating threats to human life.

C. Douglas Golden, The Western Journal
City of Billings responds after reports of explosions over Montana
Couple hear 'cats' screaming in the woods, find something entirely unexpected instead
Murdered GOP lawmaker was shot 7 times in the head
George Soros finally given the perfect title
Man shows his electric car lost 70% of its acceleration ability in the cold
See more...