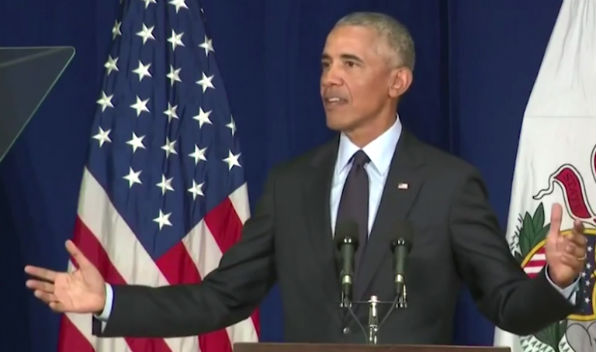 Former President Obama speaks at the University of Illinois at Champaign-Urbana on Sept. 7, 2018 (Cspan screenshot)

During the Soviet era, “samizdat” referred to the clandestine copying and distribution of literature banned by the state. Since official news sources were little more than communist government propaganda, samizdat was often the only source of truthful reporting. In “Unmasking Obama: The Fight to Tell the True Story of Failed Presidency,” Jack Cashill tells the story of how an American samizdat of bloggers, online journals, and citizen journalists challenged the left – and, occasionally, the more “respectable” right – for control of the Obama narrative. In this excerpt Cashill tells the story of unlikely samizdat contributor Susan Daniels and what she discovered about President Barack Obama.

Without the support of the more “respectable” right, potential scandals can die aborning. As an illustration, let me cite the work of Susan Daniels, a licensed private investigator from Ohio.

Although now in her seventies, Daniels remains sufficiently lively and attractive to get hit on in airport bars. She is no one’s fool and never has been. A movie could be made of her earlier life. In fact, one already has, but that’s a story for another day.

In 2009, Daniels was asked to run a background check on Barack Obama. Working with her law firm clients, Daniels had run checks on thousands of individuals without anxiety or incident. This was different.

In June 2009, Barack Obama had been president for six months. The House and Senate were both in Democratic hands, and the permanent bureaucracy skewed heavily left.

What Daniels planned to do was perfectly legal. That said, she had a generalized fear of retaliation from somewhere within the federal government. Had Daniels been younger, had any of her seven children still depended on her, she probably would have punted.

Daniels had access to proprietary databases denied to ordinary citizens. She entered “Barack Obama” and “Chicago” into one database without result. She tried with another and again came up empty. The third entry paid off.

Up popped Obama’s name, his date of birth, an address in Chicago, and his Social Security number (SSN). The SSN immediately struck her as fishy. At that time, “042” SSNs were assigned only to individuals who applied from the state of Connecticut.

Intrigued, she entered Obama’s SSN into another database and came up with a list of his past addresses in Illinois, Massachusetts, and the District of Columbia. Daniels learned that Obama was twenty-six years old when he first used this SSN.

At that time, he was living in Chicago. She found the same Connecticut-based SSN for Obama with the Massachusetts driver’s license bureau in 1989 when he was at Harvard and on a 2009 tax return that a staffer carelessly posted online.

With further research, Daniels was able to pinpoint Monday, March 28, 1977, as the day Obama’s SSN was authorized. In March 1977, however, Obama was a fifteen-year-old living in Hawaii. Obama’s half-sister, Maya Soetoro, was about that age when she received her SSN in 1985 or 1986 with a standard Hawaiian prefix of “576.”

There was no getting around the obvious: President Barack Obama had been using an anomalous and possibly fraudulent SSN for more than twenty years.

Alarmed by what she found, Daniels contacted her local congressman, a Republican, since deceased, but he ignored her entreaties. She wrote to any number of other members of Congress with comparable results.

“Investigators Susan Daniels and John Sampson are asking why the president is using a Social Security number reserved for Connecticut applicants,” Kinsolving said to then press secretary Robert Gibbs.

Gibbs tried to laugh off the statement, but Kinsolving persisted, “Do you know of any record that the president ever had a mailing address in Connecticut?” Gibbs mockingly linked the question to the birth certificate issue. When Kinsolving tried to refocus the discussion on the SSN, Gibbs abruptly ended the briefing. This was as close as the story ever came to surfacing in the major media.

Perhaps the best known of the “fact checkers” is Snopes. which seemed to have no greater purpose during Obama’s presidency than to kill stories potentially harmful to the president. The Obama SSN story proved to be a classic Snopes bait-and-switch.

Written by Snopes founder David Mikkelson and filed tellingly under the rubric “Birther,” the piece baited the audience with a legitimate question, “Did Barack Obama Steal His Social Security Number?”

In the subhead, however, Mikkelson asked a red herring of a question and served up an appropriately misleading answer, “Barack Obama did not appropriate the Social Security number of a dead man born in 1890 and use it as his own.”

Mikkelson then planted a big red X symbol and the word “False” in bold underneath the headline. Readers who preferred to remain ignorant of Obama’s foibles, journalists most notably, would have felt no need to go beyond the headline.

The disinformation continued. In the first sentence of the body copy, Mikkelson assured the curious that the tale of Jean Paul Ludwig, the man allegedly born in 1890, was “fantastical” and “easily debunked.” The tale was not exactly “fantastical,” but it was inaccurate. Daniels herself had debunked it. What Mikkelson could not debunk – he conceded as much – was the Connecticut source of the SSN.

Wrote Mikkelson in seeming wonder, “Why Barack Obama’s Social Security card application might have included a Connecticut mailing address is something of a curiosity as he had no known connection to that state at the time.”

Unlike Obama’s birth certificate, whose legitimacy may never be certified, Obama has inarguably been using an SSN that originated in Connecticut. This SSN is at least a “curiosity” and quite possibly a fraud.

Reporters should have been all over this scandal in the making. They were not. Daniels surfaced the story in 2009 and was prominently attached to it in the alternative media, as well as at a White House press conference. Yet she never received a call from anyone beyond the samizdat.

Doing the White House’s cleanup work, Mikkelson acknowledged a “discrepancy” but dismissed it as “a simple clerical or typographical error.” He attributed the discrepancy to the fact that Obama’s ZIP code in Hawaii was 96814 while the ZIP code for Danbury, Connecticut, was 06814.”

He then speculated that an accidental switch in initial digits led to an errant SSN for Obama. To Mikkelson’s humble credit, this was the best of the arguments circulating around the left side of the blogosphere.

One popular trope, unfortunately echoed by Bill O’Reilly on Fox News, was that the young Obama enrolled in Social Security because his father “lived in Connecticut for several years.” In fact, Obama Sr. never lived in the Nutmeg State, and the young Obama never saw him in any state but Hawaii, if there.

The Obama faithful did not worry themselves with details, but Susan Daniels did. In researching the rogue ZIP code theory, she discovered that none of the three Hawaii ZIP codes in which Obama once lived had a viable counterpart in Connecticut.

Two did not exist, and the third was reserved for the exclusive use of Union Carbide. No one in either the mainstream media or on the responsible right followed up on Daniels’s research. Despite all the questions about Obama’s origins, journalists had less than zero interest in exposing what could have been a career-killing scandal.

As Daniels could see up close, Barack Obama enjoyed a near immunity from press curiosity. Equally incurious were those responsible Republicans whose fear of being thought racist kept them from challenging Obama on any issue relating to his origins or identity.

In the years since Daniels went public, three Pulitzer Prize winners have written Obama biographies. None of the three, all named “David” – Remnick, Maraniss, Garrow – so much as mentioned the Connecticut SSN “curiosity,” not even to dismiss it. Neither did the fourth David, David Mendell, who wrote his biography before Obama became president.

Daniels’s experience serves as something of a template. The reader does well to bear it in mind. Journalists who shied from learning the truth about Obama’s Social Security number were not about to ask him where he was on the night the Benghazi consulate was attacked, what he knew about the IRS war on the Tea Party, or how he came to authorize “Fast and Furious,” let alone what role he played in protecting Hillary Clinton from prosecution or in spying on Donald Trump’s campaign.

Jack Cashill
Jack Cashill has a Ph.D. from Purdue University in American studies. His lastest book is "Unmasking Obama."
Libs, welcome to the Resistance
Dems, are you with Joe Manchin or Robert Byrd?
How Brandon first got himself elected to the Senate
The real insurrection began on Jan. 5 … 2017
Where were the feminists when Kim Potter needed them?
See more...