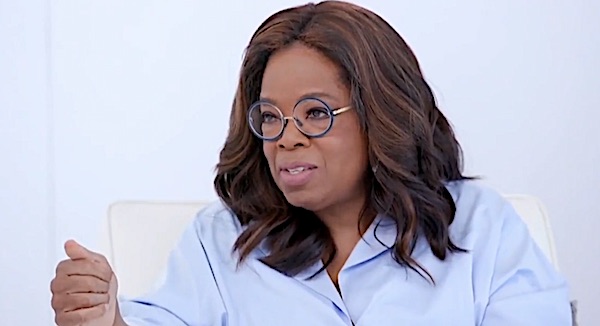 In response to a video in which Oprah Winfrey encourages white people to admit they are racist, radio legend Rush Limbaugh pummeled the popular black author and former television host.

"This country is defined by people who came from nothing, like she did," Limbaugh said on his national broadcast Wednesday.

Limbaugh was reacting to Winfrey's discussion with NFL linebacker Emmanuel Acho on a recent episode of "The Oprah Conversation," as several white guests admitted their racism.

Winfrey said, "There are white people who are not as powerful as the system of white people – the caste system that's been put in place – but they still, no matter where they are on the rung, or the ladder of success, they still have their whiteness."

"[Whites have a] leg up," she maintained. "You still have your whiteness. That's what the term 'white privilege' is. It means that whiteness still gives you an advantage, no matter. It is the fundamental issue."

Limbaugh noted that Oprah was promoting a new book in her book club titled, "Caste: The Origins of Our Discontents" by Isabel Wilkerson, which Winfrey said "provides a new way of seeing racial inequality, giving rise to countless aha moments and helping us truly understand America as it is now and how we hope it will be."

"None of that ever happens. People are worn out. The emotional reservoir is empty. And I think there's so many people who are racists and there's so much racism, and America so sucks and America is so mean, America's so evil, they need a new way to explain how bad America is. So now America has a caste system.

"Isabel Wilkerson says she was honored and thrilled that The Oprah had chosen her book. Oh, Lordy, isn't it such an exciting day. We have an American caste system now. It's a new way of explaining how black people don't have a chance. Except, of course, for The Oprah. And except, of course, pick your successful black person. They're all over the place. I guess we need some exemptions.