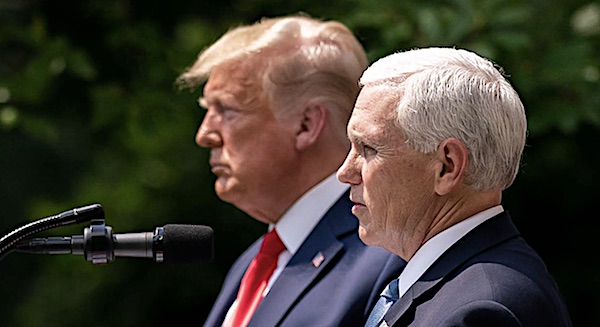 ABOARD AIR FORCE TWO — The facial lines are obvious up close, shallow creases and deeper ridges visible through thick television makeup — wrinkles cut into the visage of a vice president who finds himself campaigning not just against a political challenger, but against an unprecedented pandemic. Neither fight has gone exactly to plan.

Mike Pence still smiles through an interview with RealClearPolitics in his 757 cabin, doing his best not to go off script in possibly the least-scripted era of American politics.

He had flown to North Carolina earlier in the day to speak at the kickoff of the Republican National Convention, and is now returning to Washington. “This is the moment for each of us to do everything that we can in our power to reelect this president, this team,” he told 336 socially distanced delegates in the ballroom of the Charlotte Convention Center. “I’m going to work my heart out to be your vice president for four more years,” he promised after they officially renominated him. “We’re going to make America great again, again.”

The again-again argument isn’t new. It is the pandemic version of President Trump’s original 2020 slogan, “Keep America Great.” His administration built a humming economy, the campaign argues, and once the coronavirus is cured, or at least contained, they can build it back. Not everyone is convinced.

Trump trails former Vice President Joe Biden in the RealClearPolitics polling average by 7.6 percentage points. And possibly worse for Republicans, Democrats are trying to lure away evangelical and religious voters loyal to the president with an argument about “restoring the soul of the nation.”

As point man for evangelical outreach, the vice president offered perhaps his strongest rebuttal to that overture just days after Democrats highlighted the Catholic faith of their presidential candidate at their convention: Voters will not be swayed by Biden’s prime-time testimony, Pence insisted, when they see the policy that he is advancing.

“Joe Biden actually said he would reimpose the Obamacare mandates on the Little Sisters of the Poor,” Pence said, referencing the Roman Catholic religious order that successfully challenged the Affordable Care Act’s requirement that employers provide health insurance coverage for contraception. “Think of a group of nuns who have taken a vow of poverty to help the poor,” he added, “and they were targeted by the Obama administration for simply trying to live out their faith.”

How can the country look to the opposition nominee for moral leadership, Pence continued, when the former vice president has shifted in his own convictions as the election draws closer? He pointed to how Biden recanted decades of support for the Hyde Amendment, a provision that bans federal funding for abortion and that the Democrat had long defended while citing his Catholic faith.

“Biden reversed his position, and now he not only supports taxpayer funded abortion — both at home and abroad — he is calling for increases in funding of Planned Parenthood of America,” Pence argued.

All of that should make Biden untenable to religious voters, the vice president concluded, because “if you believe in faith and family and life and liberty, there’s only one choice in this election and that’s four more years of President Trump.”

It was a heaping serving of social conservatism, the sort of thing that endears Pence to evangelicals and motivated more than 80% of that bloc to vote Republican in 2016. It also comes during an ongoing identity crisis inside the Grand Old Party. Before the convention delegates officially nominated their presidential ticket Monday, two dozen retired Republican lawmakers, led by former Arizona Sen. Jeff Flake, announced that they are supporting Biden.

And after a dizzying four-plus years, some openly wonder what it means to be a Republican anymore.

Is it adherence to a policy platform? The RNC didn’t draft a new one, opting instead to retain the existing document without revision or debate.

Is it supporting the vision of the White House? The president recently announced his “core priorities” for a second term, a scattershot list of 50 bullet points that targets everything from “extremist groups like ANTIFA” to “the globalist swamp.”

Is it loyalty to Trump? The president, after all, values this above all else.

The Pence answer was a list of policies and priorities that ranged from “a strong national defense” and “an America first foreign policy” to deregulation and free trade agreements that are “fair and reciprocal.” None of it short enough for a bumper sticker. All of it amounting to a quick summary of the many political and cultural fights the president has waged.

A journeyman of both fiscal and social conservatism, Pence said that being a Republican in 2020 “means standing up for the values and the ideals that have always made this country great — life and liberty. Standing up, apologetically, for the right to life, standing for freedom of speech, freedom of religion — all of which are under siege in the cancel culture in which we live today.”

Trump has waged a culture war since entering politics. Just this week, he lobbed salvos at Goodyear over the tire company’s banning of “MAGA attire” in the workplace. But it has since become official campaign strategy in the wake of nationwide protests over police brutality and racial injustice, which have grown violent in Seattle, Minneapolis, and Portland, Ore., among other cities. Those encouraging this destructive behavior, Trump argued at Mount Rushmore in July, were trying “to overthrow the American Revolution.”

Pence embraced the theme. He argued in the ballroom at the RNC and later in his Air Force Two cabin that while Biden says “democracy is on the ballot,” the reality is that “law and order is on the ballot, and to my knowledge no speaker at the Democratic National Convention spoke about the mayhem that’s claiming lives and literally setting fires in the streets of the major cities of this country.”

Trump has tried to make this his calling card, and the message is in line with voter sentiment. A new study by Pew Research found 59% of respondents said violent crime is “very important” to their vote. But while the president has signed executive orders incentivizing law enforcement reforms, the vice president focused on violent demonstrations, and sidestepped questions about police brutality.

Pence will speak in Wisconsin on Saturday in Franklin, a 45-minute drive from Kenosha where a black man was shot in the back multiple times at close range by local police. When asked if he had seen video of that shooting or of similar occurrences, Pence said that “it shocks the conscience.” But the vice president also used that phrase in discussing criminal violence.

“It shocks the conscience to see people being beaten in the street, to see a man gunned down in a major city walking with a little girl at his side -- to see that man lose his life,” he said, an apparent reference to Anthony Robinson, who was killed in New York City on July 5. “Make no mistake about it, we’re seeing a rise in violent crime in cities that are yielding to the agenda of radical left — of cutting funding or defunding or dismantling law enforcement.”

Republicans argue that the violence will only get worse if a Democrat is elected president. But the crime wave is happening now. Isn’t that unusual argument for an incumbent to make? “When protesters were laying siege to monuments in our nation's capital,” Pence argued, “Joe Biden sent out a press release. President Donald Trump sent in the National Guard.” And in terms of curbing the violence, he said that the administration “will continue to call on Democratic mayors and governors to do their job.”

It was an on-message response, and one that Pence will soon test against vice presidential nominee Kamala Harris. Asked about his debate strategy, he said only that the focus of the campaign would be on making sure “the American people understand that Joe Biden and the Democratic Party have been overtaken by the radical left.”

“The selection of the most liberal member of the United States Senate as his running mate,” he argued, “just confirms what President Trump and I have been saying all along -- that, while some in the media want to paint Biden as a pragmatic moderate, he’s anything but.”

All of this is taking place with the pandemic as an immense backdrop. It has been Pence’s job to lead the White House Coronavirus Task Force, a duty that Trump says has cost the vice president plenty of sleep.

The White House recently heralded the Food and Drug Administration’s authorization of emergency use convalescent plasma, a treatment that FDA Commissioner Stephen Hahn said resulted in a 35% improvement in survival rate for COVID-19 patients. Pence promised again that a vaccine is on the horizon, and pledged that while “we’ll do our part for the health of the wider world,” the first doses will be “for the American people.”

But the virus knows no schedule and certainly is immune to politics. What happens if Trump and Pence falter at the ballot box while the pandemic continues its assault? Are they preparing a transition plan to efficiently hand off duties of the task force so the next administration can continue that work? Pence wouldn’t entertain the idea of losing.

“I believe we’re going to be reelected for four more years,” he said.

“I honestly think we’ll have a vaccine for the coronavirus,” he added. “I believe with all my heart that's going to happen this year.”

The election, meanwhile, is in 70 days, and the vice president continues to do double duty fighting on two intertwined fronts, one political and the other biological.