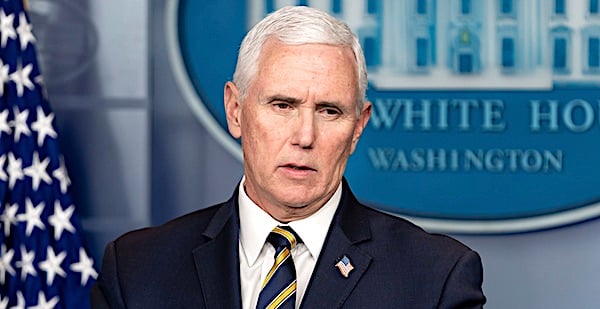 “We stand at a crossroads of freedom,” Pence said. “Before us lie two paths: One based on the dignity and worth of every individual, and the other on the growing control of the state. One road leads to greater freedom and opportunity, and the other road leads to socialism and decline.”

He added, “The choice we face is whether America remains America.”

Pence’s words drew strong applause from the 250 supporters gathered in the hotel ballroom. It was Pence’s third and final stop in the Tampa area, where he was greeted with flag-waving and sign-toting supporters along the route of the motorcade. Pence also visited a women’s medical clinic and a Baptist church Wednesday.

Throughout the day, Pence touted the Trump administration’s pro-life achievements and commitment to religious freedom while offering a warning to supporters on what the future might hold.

Pence also spoke forcefully in defense of law enforcement and against efforts to defund police in America’s major cities.

“President Trump and I know that the men and women who put on the uniform of law enforcement every day are the best people in this country,” Pence said to applause. “With this president and this administration, we will always back the blue. We will always stand with the men and women on the Thin Blue Line of law enforcement. We’re not going to defund the police—not now, not ever.”

The Daily Signal traveled with Pence aboard Air Force Two as a member of the press pool—a point of contention for some journalists in the White House press corps. The New York Times published a story Wednesday evening, “Member of Conservative Think Tank Takes On Reporter Duties on Air Force Two.”

Pence’s staff invited The Daily Signal after the White House Correspondents Association was unable to find a volunteer to travel with the vice president. NBC News, The Federalist’s Mollie Hemingway, and CBN News’ David Brody also accompanied Pence on the trip.

In an interview scheduled to air Thursday, Pence told CBN News about the importance of the Supreme Court. He also bluntly stated, “Chief Justice Roberts has been a disappointment to conservatives.”

Pence cited Trump’s appointment of conservative jurists among the administration’s top accomplishments, adding other achievements that include protecting the sanctity of life and religious freedom, rebuilding the military, reviving the economy, cutting taxes, reducing red tape, enacting the U.S.-Mexico-Canada Agreement, and creating jobs.

“President Trump has kept the promises that he’s made to the American people, to the people of Florida, and especially to people of faith,” Pence said.

Pence’s early afternoon visit to a pregnancy center marked the first time a sitting vice president appeared at such a medical clinic, according to the pro-life Susan B. Anthony List. Afterward, Pence spoke to the organization’s Life Wins! 2020 Tour at the nearby Starkey Road Baptist Church.

“Life is winning in America,” Pence said. “I believe life is winning because of the compassion and love that have been shown to women and children.”

Pence spoke about his meeting at the clinic with Kia Farrell and her son Ollie Farrell, who turns 1 next month. Farrell considered an abortion at Planned Parenthood before turned to A Woman’s Place.

“There has never been a more pro-life and pro-family administration,” Hargan said.

Pence said the Declaration of Independence put life at the center of the American experiment. Yet, 47 years ago, the U.S. Supreme Court made a decision in Roe vs. Wade that fundamentally challenged the right to life. He warned that decades of pro-life progress could soon be erased.

He added, “I’m more convinced than ever of two things: America is a freedom-loving nation, and this is a nation of faith.”

With cases of coronavirus still hampering Florida, Pence acknowledged the challenges facing America. He said the Trump administration was focused on helping all Americans.

“We’re opening up America again, and we’re opening up American schools again,” Pence said to applause. “I’ll make you a promise—as you in the Sunshine State and people all across the country continue to contend with this pandemic—we will not rest until Florida and America put this coronavirus in the past, and we bring Florida and America back bigger and better than ever before.”

WND News Services
These reports are produced by another news agency, and the editors of WND believe you'll find it of interest.
Tax-dodging easements described as 'purple mountain travesty'
Facebook's election campaigning raises question about what's 'good for democracy'
Gov. Cuomo planning statue of Ruth Bader Ginsburg in Brooklyn
'Only institutions can save us'
Spider-like venom found in Australian stinging trees
See more...