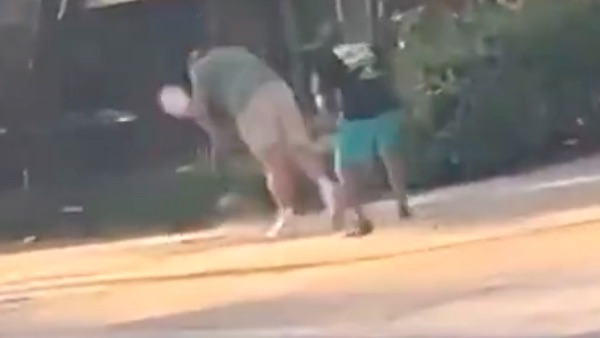 A man is smashed in the head with a brick by an assailant in Baltimore on Sunday, Aug. 30, 2020 (Video screenshot)

A disturbing video depicting graphic violence in Baltimore is going viral online, as a street thug is shown sneaking up behind a man and smashing a brick into his head, causing the victim to fall unconscious to the ground. (WARNING: Video content is graphic)

Man Caught On Video Smashing another, in the Back of the head with a brick in Baltimore😬 pic.twitter.com/wmbOdCxVOA

The attack occurred Sunday evening at intersection of W. Hamburg Street and Leadenhall Street in Baltimore, according to City Councilman Eric Costello, who condemned the attack on Instagram.

"It should go without saying that the complete depravity to human life illustrated in this video is absolutely disgusting and should be investigated and prosecuted to the fullest extent of the law,” Costello said in his caption, as he pleaded for the public's help in apprehending the unknown assailant.

Voices can be heard in the video laughing in reaction to the victim's pummeling.

The severity of the incident caught the attention of actor and political activist James Woods, who tweeted: "The thugs are running wild in Democrat cities. Buy a gun. Become well-versed in self-defense laws. Learn to use your weapon with proficiency. Learn gun safety. Take America back."

The thugs are running wild in Democrat cities. Buy a gun. Become well-versed in self-defense laws. Learn to use your weapon with proficiency. Learn gun safety. Take America back. pic.twitter.com/TCiOO3TaHI

Woods' sharing of the video has prompted more than 1.6 million views as of Monday afternoon.

Online reaction to the incident includes comments such as:

WJZ-TV, the CBS affiliate in Baltimore, reported: "According to the police report, an officer responded to the 100 block of W. Hamburg Street for a report of an aggravated assault. When the officer arrived however, there was no victim on the scene. However, the officer did see a pool of blood on the north side of the sidewalk.

"Upon following up with the person who called, the citizen who reported it refused to give their name or address, but said he was in his home around 6:30 p.m. on W. Hamburg Street when he heard a loud argument between two men.

"One of the men began to walk away when the other picked up two bricks, approached the other man and struck him in the back of the head. The man then ran away, leaving the victim on the ground."