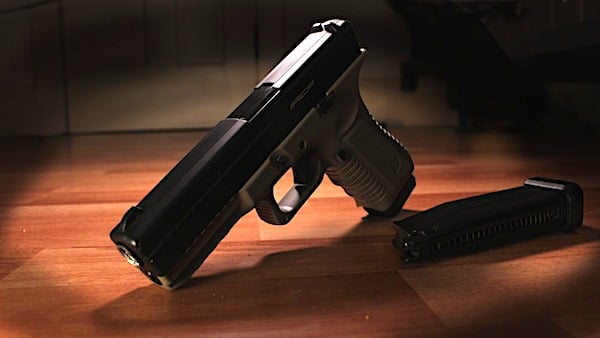 Philadelphia officials are caught in the middle of a wave of gun violence in their city. Nearly two dozen shootings happened in the city over the last weekend alone and four people were left dead. Another 15 were wounded.

It's far from the only city where such developments are being reported amid of series of anti-police moves by Black Lives Matter and others in recent weeks. Some places are "defunding" police, other places officers are just being attacked and maligned.

But it appears that Philadelphia, so far, is the only city to pursue this solution: Having law-abiding gun owners turn in weapons to crack down on gun use by criminals.

Are people really this dumb?

Law-abiding citizens should turn in their guns and have no means to defend themselves while outlaw criminals who have been breaking the law will keep weapons and continue their criminal ways with a leg up. 👍

This is a special kind of stupid. https://t.co/ycJLsKZIyC

According to a report in BizPacReview, the "Home Gun-Check Campaign" was launched over the weekend.

It's not a buyback program, which has happened in other cities.

It's a turn-it-in campaign.

"Get those guns, run in that room, see what’s in there, find out what is being hidden in your house, take it out and turn it in," City Councilmember Cindy Bass told a news conference.

“Law-abiding citizens should turn in their guns and have no means to defend themselves while outlaw criminals who have been breaking the law will keep weapons and continue their criminal ways with a leg up,” Donald Trump Jr. wrote.

Police officials boasted that they've made provisions that people who turn in their guns "will not be asked to produce identification." Nor will an investigation follow, they said.

The Philadelphia Inquirer said, "The number of homicides in the city in 2020 soared to 261 Thursday night. That's a 29% increase from the same period last year and the highest number of killings in nearly three decades…"

"Mark in DFW" pointed out he has guns around the house, "and the funny thing, they are all legal, serve a purpose and only fire when I pull the trigger. How about the people that perpetrate gun violence turn themselves in."

Another, "Mindy Robinson," said, "Can you imagine being so worthless and dense, that you actually think guns laying around that no one is using is what's causing an uptick in violence? How about you STOP RELEASING CRIMINALS."