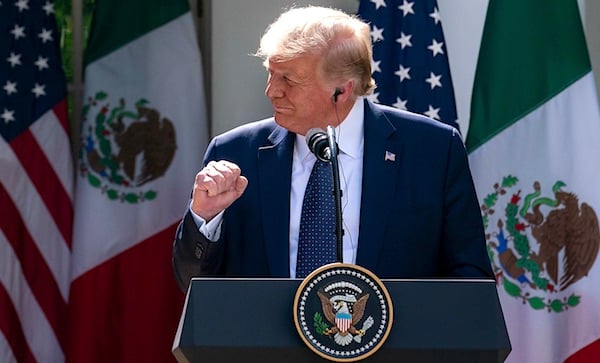 A student at New Jersey's Stockton University is fighting back after the university threatened to punish him for using an image of President Trump as his background during a class held via Zoom.

Doctoral student Robert Dailyda declared on Facebook he's had enough of "the leftist agenda of BLM and the white self haters."

He faces six charges, including harassment and cyberbullying, and may have to attend a "social justice workshop" if found guilty.

The Foundation for Individual Rights in Education, or FIRE, warned the university's president in a letter that its charges and possible punishment of Dailyda could violate the First Amendment.

FIRE said that "if that, in Stockton’s estimation, is worthy of investigation, wait until they learn about Patrick Henry."

Zach Greenberg, the author of FIRE’s letter to Stockton President Harvey Kesselman, said that like "its Atlantic City neighbor, Stockton is doubling down and gambling with students’ constitutional rights — a risky bet when FIRE is involved."

The conflict began when Dailyda used a photo of Trump as his Zoom background during a July 1 virtual class.

Other students complained about him in a private GroupMe chat, saying they felt "taunted."

University officials then "asked him to explain his political views, claiming that students were offended by his Zoom background, comments in the GroupMe chat, and a subsequent Facebook post defending his expression, which the university claimed students found 'offensive, threatening, and concerning.'"

Stockton then accused him of violating the code of conduct for disruptive behavior, discrimination, harassment, creating a hostile environment, causing harm and cyberbullying.

"Stockton’s organizational leadership program claims to focus on the integrity of leadership, however from my experience they do not associate integrity with free speech and open debate," said Dailyda.

"They have created a deeply embedded and systematic environment that squelches the free speech of those who disagree with their radical agenda. I never thought I would see this from a public university that should be facilitating a marketplace for the full spectrum of ideas, not a monopoly."

FIRE told Stockton officials they have a responsibility to respect the First Amendment, which protects expression they might not like. In fact, as a public university, the First Amendment is binding on Stockton, FIRE pointed out.

FIRE noted the only evidence the university has against Dailyda is that some students complained his "expression" was "offensive, threatening and concerning" to them. They complained of feeling "offended, disrespected and taunted."

"Here, Dailyda's Facebook post is clearly political hyperbole meriting the highest level of First Amendment protection," FIRE charged. "The expression here is clearly protected. It did not disrupt any university activity, nor does it amount to an unprotected true threat or harassment. ... Stockton may not permissibly use its disciplinary process to punish Dailyda for his protected political expression."