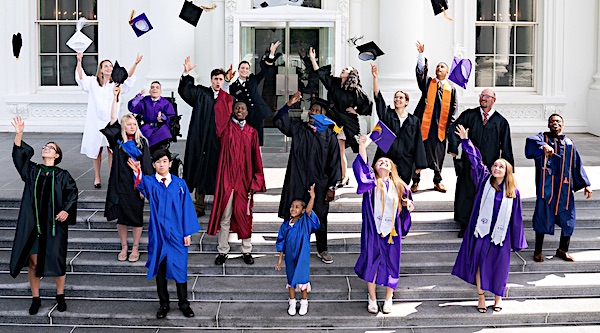 Graduates from across the nation celebrate the commencement ceremony honoring the Nations Graduating Class of 2020 Friday, May 22, 2020, on the steps of the North Portico of the White House. President Donald J. Trump, First Lady Melania Trump and Secretary of Education Betsy DeVos hosted the graduates at a commencement ceremony honoring the 2020 Graduating Class in the East Room of the White House. (Official White House photo by Tia Dufour)

The most critical element in providing for an economic recovery is the safe reopening of schools. Because many schools are planning to remain closed, parents need choices for the education of their children so they can begin to get back to work and so their kids don’t fall behind and imperil their future.

Elected officials will ignore these concerns from parents at the own risk, but those who listen to their voters and support meaningful parental school choice will see results on Election Day.

According to Club for Growth PAC polling of voters in states with Republican senators who face challenging reelections, candidates are already in precarious positions, and failure to act on parental choice could result in electoral disasters. If those senators vote to continue sending tax dollars to state and local government education bureaucrats but nothing to parents whose schools are closed to help them choose other options, polling suggests voter support for the Republican incumbent could drop 25%.

And following Sen. Chuck Schumer’s flip-flop to support opening schools this fall, we can only hope the Senate Republican leadership begins to understand the political environment is begging for a bold solution in order to provide a safe, high quality education to all students.

Many schools plan to be closed even though public health experts, including the American Academy of Pediatrics and the National Academies of Science, Engineering and Medicine, are pushing schools to open safely.

Scott Gottlieb, the former commissioner of the Food and Drug Administration, argues, "Schools should open in the fall. It's critical for meeting the educational and social needs of children. But local officials should have the discretion to take tailored actions to help keep children safe."

Meanwhile, it’s becoming clearer that reopening schools is not only about safety in light of the coronavirus. With a growing chorus of doctors and public health officials calling for schools to safely reopen, the socialist bureaucrats have now made reopening about a host of demands that have nothing to do with the pandemic.

In Los Angeles, the teachers union is demanding the implementation of "a moratorium on private schools, defunding the police, increasing taxes on the wealthy, implementing Medicare for all,” and more, according to a report from San Diego radio station KUSI.

The Demand Safe Schools Coalition, a radical coalition of education bureaucrats, recently held protests across the country and presented a series of demands, few of which had anything to do with making schools safer. Instead, the demands included police-free schools and a moratorium on new parental-choice programs.

Sen. Ted Cruz has introduced legislation to address this educational emergency. His bill would provide parents with Emergency Parental Choice Scholarships to alleviate many of these concerns and ensure parents have flexible educational options.

These scholarships would provide families with up to $10,000 to help pay for private school, public charter school, or expenses related to homeschooling. Even students remaining in public schools would receive money covering the costs associated with obtaining quality education. Congress could pay for this emergency initiative by reprogramming previous COVID-19 relief and prioritizing the safe education of all K-12 students.

COVID-19 has exposed the reality that America faces a real emergency with the education of our children. The GOP should offer voters an alternative focusing on rebuilding the economy through pro-growth policy, not government stimulus, and helping all students receive a safe, high quality education through targeted programs such as Emergency Parental Choice Scholarships. If members of Congress do nothing or pass legislation that is simply more of the same, they will suffer the consequence on Election Day.

David McIntosh is the president of Club for Growth PAC. The Club for Growth is the nation’s leading group promoting economic freedom through legislative involvement, issue advocacy, research, and education. He led regulatory relief efforts during the first Bush administration. He is also a former Indiana congressman and cofounder of the Federalist Society.