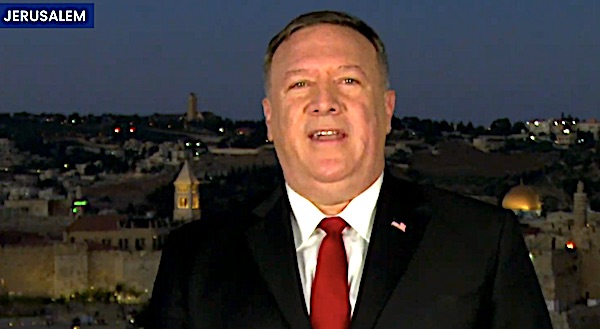 The fact that the nation’s top diplomat was giving the speech at all was a norm-defying statement in and of itself. The party and team Trump not only ignored Democratic charges that having Pompeo deliver the remarks raised serious ethical red flags, they positioned it as an immediate prelude to their second-night closer, first lady Melania Trump.

It was the first time a secretary of state had addressed a national party convention in 48 years. And Pompeo delivered his pre-taped remarks from Israel no less, at sunset, against a backdrop of the holy city’s iconic rooftops.

In 1972, then-Secretary of State William Rogers delivered a tribute to the late President Eisenhower, who had passed away three years before, at the Republican National Convention. But Rogers gave the speech from a traditional stage about a late president, while Pompeo used his position as America’s emissary to the world to make a full-throated case for a giving President Trump a second term.

As soon as his speaking slot was announced late last week, Democrats were apoplectic, accusing Pompeo of unprecedented politicization of his office and the U.S.-Israel alliance – which, they argued, violated the Hatch Act, a law barring all members of the executive branch, except the president and the vice president, from engaging in some forms of partisan political activities when they are on duty, in uniform or on federal property.

A State Department spokesperson responded by noting that Pompeo would be speaking during personal downtime, and Republican National Committee Chairwoman Ronna McDaniel, more obliquely defending the decision, said the party would pay for all convention-associated events.

Before Pompeo had uttered a word, House Democrats were teeing up an investigation into his  speech, along with Trump’s use of the White House for several convention speeches and a naturalization ceremony held there just an hour before Pompeo’s remarks.

The Tuesday speech and its disregard for political norms was no accident. The decision to deliver it despite the Democratic backlash fit perfectly with the most confrontational part of the GOP’s second-day convention messaging — that the Trump administration and its supporters don’t back down from mobs, including those in the left-wing media as well as the politically motivated investigative variety.

Earlier during night two, Nicholas Sandmann spoke at the virtual convention, reminding voters that he refused to be “canceled” by a media maelstrom and exhorting others like him not to bow to the woke will. Sandmann is the then-Covington High School teen who was targeted by the media after a misleading viral video depicted him in a Trump MAGA hat staring at a Native American protester banging a drum close to his face. He recently settled defamation lawsuits with the Washington Post and CNN.

For Pompeo,  it was his choice of location for the speech that demonstrated his own defiance of critics in Congress and the media. The 56-year-old Kansan used an undisclosed location in Jerusalem overlooking the old city to make his case for four more years of President Trump’s America-first foreign policy.

The former CIA director was using the full weight of his position to showcase the close ties to Israel he and Trump have fostered after the 2015 Obama-Biden Iran nuclear deal stretched the relationship to a near breaking point. Trump, with Pompeo in the lead, renounced the deal as a sop to Iran’s mullahs and scrapped it two years ago. Trump also followed through on a longtime empty promise by all three of his immediate predecessors to move the U.S. Embassy to Jerusalem.

“The president moved the U.S. Embassy to this very city of God, Jerusalem, the rightful capital of the Jewish homeland,” he said. “Just two weeks ago, the president brokered a historic peace deal between Israel and the United Arab Emirates.

“This is a deal that our grandchildren will read about in their history books,” he added.

Flatly rejecting the Democratic narrative that Trump has embarrassed the U.S. on the world stage, Pompeo made the case that the president’s success in drawing down troops in Afghanistan, America’s longest war, and successfully avoiding other bloody quagmires, is proof that his peace-through-strength foreign policy is working and should not be derailed.

“The primary constitutional function of the national government is ensuring that your family and mine are safe and enjoy the freedom to live, to work, to learn and to worship as they choose,” he said in his remarks. “Delivering on that duty to keep us safe and our freedoms intact, this president has led bold initiatives in nearly every corner of the world.”

When it comes to China, Trump has “pulled back the curtain” on the Chinese Communist Party’s “predatory” infiltration into American universities and most elite research institutions, Pompeo argued. The president has held Beijing accountable for covering up the “China virus and allowing it to spread death and economic destruction in America and around the world.”

He also credited Trump with ending the “ridiculously unfair trade arrangement with China that punched a hole in our economy.”

Because of Trump, “NATO is stronger, Ukraine has defensive weapon systems and America left a harmful treaty so our nation can now build missiles to deter Russian aggression,” Pompeo said.

In the Middle East, the president’s decision to launch a strike that killed top Iranian Gen. Qasem Soleimani was the right thing to do, he said. Soleimani was threatening U.S. soldiers based in Iraq and was responsible for the “murder and maiming” of hundreds of them during the Iraq War, along with thousands of Christians in the region.

When Trump took office, he recalled how ISIS’s footprint was the size of Great Britain, and now the caliphate is wiped out. “Its evil leader, Abu Bakr al-Baghdadi, is dead, and our brave soldiers, they’re on their way home,” he said.

The speech ignored recent revelations that Russia paid bounties to Taliban insurgents to attack U.S. and coalition troops, which raised questions as to whether the Trump administration knew about it and failed to rebuke Russia.

It also said nothing of Trump’s decision last year to withdraw American troops from northern Syria, a sudden and unexpected move that effectively ceded the area to the Syria government and Russia and abandoned the Kurds, a key U.S. ally in the fight against ISIS. Kurdish leaders had been petitioning the U.S. for more military support, not less.

The move also left Syria’s minority Christians, their numbers already decimated by ISIS genocide, to fend largely for themselves against both Turkey-backed and Iranian militias.

Pompeo, himself a committed Christian, has repeatedly expressed deep concern about maintaining religious pluralism in the Middle East. With his help and that of Vice President Mike Pence, the administration has fought entrenched U.S. and U.N. government bureaucracies to try to assist these religious minority communities in rebuilding. There has been progress, though more remains to be done.

Obama’s national security adviser, Susan Rice, on Tuesday told MSNBC that Pompeo’s record of being an “overtly religious” member of Trump’s Cabinet was “problematic” because “he’s supposed to represent all America, all of our religions, all of our threats.”

The remark showed just how different the Obama and Trump administrations are when it comes to practicing one’s personal faith amid a broader commitment to religious freedom for all. Last fall, Pompeo gave a speech praising America for its “proud history of religious freedom” and extoling “the success of nations when individuals are given their basic human dignity to practice their conscience, their faith, or to choose no faith if they so choose, all around the world.”

In his final words Tuesday night, Pompeo quoted the American pastor who was imprisoned in Turkey for two years before Trump negotiated his release.

“Pastor Andrew Brunson said upon his release that he survived his ordeal with the words of Scripture: ‘Be faithful, endure, and finish well.’”

“If we stay the course, we will,” he concluded in an obvious message to all Trump supporters, including himself.