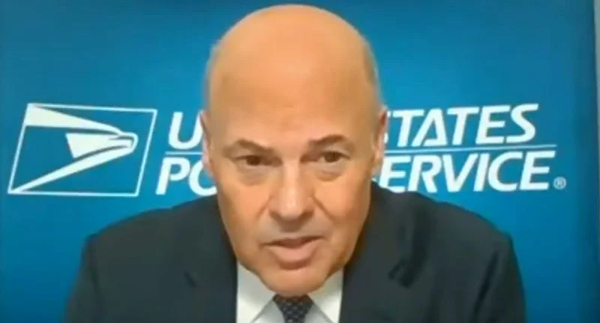 Sen. Gary Peters, D-Mich., the ranking member on the Senate Homeland Security and Governmental Affairs Committee, pressed DeJoy on the Democrats' accusation from he discussed any changes at the Postal Service in relation to the election with President Trump or anyone at the White House.

"I have never spoken to the president about the Postal Service, other than to congratulate me for accepting the position," DeJoy replied.

Peters pressed him on claims that he was limiting overtime and creating backlogs in mail.

"It's been curtailed, significantly, is what I understand," Peters interjected.

"It has not been curtailed by me or the leadership team," the postmaster general said.

Peters insisted: "It's been curtailed signicantly, it's gone down, it been limited."

DeJoy said that since he was appointed to the post in June, USPS has spent $700 million on overtime.

Peters asked DeJoy if he could commit to there being no Post Office closures or suspensions before the Nov. 3 election.

"I confirm Post Office closures was not a directive I gave," he replied. "That was around before I got here. There's a process to that. When I found out about it, and it had the reaction that we did, I suspended that until after the election."

Peters asked DeJoy if he would bring back any of the mail sorting machines that have been removed since he became postmaster general.

"There is no intention to do that. They are not needed, sir."

Peters followed up: "So, you will not bring back any processors?"

"They are not needed, sir," DeJoy said.

The chairman of the committee, Sen. Ron Johnson, R-Wis., slammed Democrats in his closing comments for allegedly "ginning this, these issues and these problems up into something that it's not. A very false narrative ... to extract a political advantage."

Peters insisted there are "real concerns that I am hearing."

"These are not manufactured, these are people who are coming forward talking about delays, talking about medicine that's not available for them," he said.

See the above exchange:

When DeJoy took over USPS in June, he quickly began making what were regarded as money-saving changes to the constantly-in-the-red post office, Fox News reported.

Democrats, however, charged that the changes have slowed mail service and could undermine the ability to deliver ballots this fall.

USPS, in fact, sent letters to most states warning that the Post Office might not be able to deliver mail-in ballots on time under their mail-in voting rules, Fox News reported.

But DeJoy said in his opening remarks he wanted "to assure this committee and the American public that the Postal Service is fully capable and committed to delivering the nation's election mail securely and on time."

"This sacred duty is my No. 1 priority between now and election day," he said.

President Trump added some fuel to the fire when he seemed to say in an interview with Fox Business' Maria Bartiromo that he was withholding money for USPS that Democrats included in the coronavirus relief bill for that very purpose.

His administration later walked the comment back, saying the legislation is being held up by other Democrat demands.

Former Secretary of State Hillary Clinton said in an interview she was "really worried that there will be direct interference with the election through the manipulation of the Postal Service.

"I don't think there's any doubt that any sensible person should have that there is a deliberate effort to sabotage vote by mail," she said.

White House press secretary Kayleigh McEnany, responding to the charge in an interview with Fox News, rejected the charge.

She argued the CARES Act provided a $10 million line of credit for the Post Office and said the "real crisis" is the mail-in voting irregularities in Nevada, New Jersey and Los Angeles County.

"This is a system subject to fraud, and this president will fight for the integrity of our elections," she said.