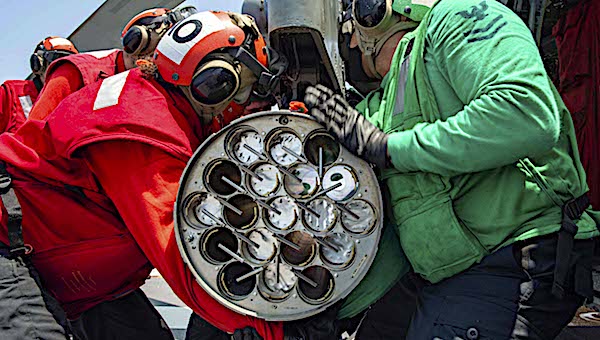 Sailors load missiles onto a Navy MH-60S Seahawk helicopter on the flight deck of the USS America in preparation for a live-fire exercise in the Phillipine Sea, Aug. 16, 2020. (U.S. Navy photo by Mass Communication Specialist Seaman Matthew Cavenaile)

Beyond the fact that the Democrats’ virtual national convention appeared to have been produced by a high school A/V department, the event was one of the most blatant exercises in revisionist history ever foisted on the American body politic.

While nominating one former senator who voted to authorize the Iraq War -- Joe Biden -- the DNC enlisted another, John Kerry, to portray Democrats as the “party of peace.”

Biden and Kerry are career politicians who have supported war for the length of their time in Washington and are members of the military/industrial/congressional complex that President Eisenhower warned us about.

“[Trump] doesn’t know how to defend our troops,” Kerry claimed, based on a bogus and debunked “Russian bounties” scandal that he, President Obama, and Joe Biden either knew about or should have known about because it supposedly happened and was first reported under their watch.

Kerry and the rest of the Obama-Biden administration dramatically expanded the war in Afghanistan, leading to over 1,000 Americans killed in action, and dragged the country into new, thankless interventions in Libya, Syria, Yemen, and elsewhere — never intending for them to win in the field.

These open-ended military engagements without military value or clearly defined objectives or outcomes result in the diminution of military morale and capability and simply grind up our finest men and women. Kerry even had the nerve to claim that “Our troops can’t get out of harm’s way by hiding in the White House bunker.”

Buried within that idiotic jibe about the president, who was following Secret Service protocol while radicals attacked U.S. Park Service Police outside the White House, Kerry unintentionally got something right.

After fulfilling his promise to destroy ISIS, President Trump brought our troops home from Northern Syria — where Kerry, Biden, and Obama had sent them to sit for years in a war zone for the benefit of “moderate rebels” (note: there is no such thing as a “moderate rebel”). Against incredible pressure from the foreign policy establishment, Donald Trump also committed to getting thousands of additional American troops out of Afghanistan as soon as possible.

Next up was Kerry’s predecessor, Colin Powell, who was among the leading engineers of the Iraq War while serving as secretary of state under former President George W. Bush.

“Our country needs a commander-in-chief who takes care of our troops in the same way he would his own family,” Powell said while endorsing the Democratic ticket, as he has done in all four presidential elections since leaving office. “With Joe Biden in the White House, you will never doubt that he will stand with our friends … he will trust our diplomats and our intelligence community[.]”

Powell, after all, is the same man who sat before the United Nations Security Council and lied, bald faced, about weapons of mass destruction in order to start a war. How dare he talk about “taking care of our troops” when he is personally responsible — as a politician, not a soldier — for the deaths of 4,507 American servicemen and women? How dare the man who lied to and coerced our closest allies into needlessly sacrificing hundreds of their own brave soldiers in a quagmire of his own administration’s creation talk of “standing with our friends?” How dare Powell — who pushed obviously false intelligence reports that confirmed his views and twisted those that did not, and who elevated the word of self-interested Iranian-backed conmen into Gospel truth, humiliating America and undermining our credibility to this day — talk of “trusting our intelligence community?”

The height of hypocrisy, however, came during the three-minute tribute to the long personal friendship between Biden and the late Sen. John McCain. “It was a friendship that shouldn’t have worked,” the narrator intoned.

Never addressed in the entire video is why that friendship “shouldn’t have worked” — in many ways, Biden and McCain were two sides of the same coin. The two men, both establishment figures in their respective parties and occasional presidential candidates, were integral members of the same Washington foreign policy “blob” for decades. To the extent that the two men differed on foreign policy views, it was only in that McCain was a more extreme devotee of the failed interventionism ideology to which they both subscribed.

John McCain was the single leading advocate of military adventurism in post-Cold War America. In addition to being the Iraq War’s greatest booster, he also tried to push America to the brink of war with Russia. He tried to pressure our allies into adding the tiny, Russia-adjacent country of Georgia into NATO, which would have obligated us to go to war with a nuclear power over the breakaway “republic” of South Ossetia, which has a population of just 53,000. When the Obama-Biden administration was bungling its schizophrenic intervention in Syria, McCain was right there on the ground, posing for photos with the jihadist-allied “moderate rebels.”

It is only thanks to a new breed of Republicans who repudiated and marginalized the Biden/McCain school’s foreign policy views — Donald Trump foremost among them — that this country has avoided more of the saber-rattling lunacy of the Iraq War era. These new Republicans demand accountable use of the military. They believe the military should be used as a last resort, but when used should be given clear, achievable objectives and ALLOWED to win. They believe in ending the meandering, vague, and open-ended military engagements that cost blood and treasure but secure nothing for the U.S. or our allies — engagements that Biden has openly called for and supported throughout his entire 47-year political career.

The consistently anti-Trump McCain’s proxy endorsement from beyond the grave only proves the president’s point: establishment figures from both parties were in cahoots with each other all along.

In 2016, Donald Trump called out the D.C. establishment’s lies and the bellicose dogmatism that got thousands of Americans killed and permanently alienated many of our closest allies. Since then, the Trump administration has reoriented our foreign policy toward peace, restraint, effective and limited use of military power, and putting America first. Joe Biden would return us to the old ways, and all the revisionist history in the world can’t change this fact.

Lt. Col. Tony Shaffer (ret) is a Bronze Star recipient for combat in Afghanistan, a retired CIA-trained senior intelligence operations officer, and president of the London Center for Policy Research.