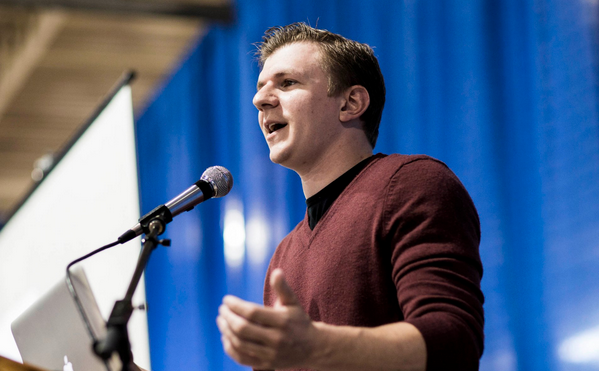 Investigative reporter James O'Keefe of Project Veritas, known for his undercover probes exposing liberal bias and corruption, is suing the FBI, claiming the bureau wrongly placed his name on a federal watch list that barred him from purchasing a firearm.

O'Keefe published a video showing him trying to buy a gun at gun stores in New York and being denied after a background check.

The lawsuit argues he "has never been convicted of a felony or any other crime punishable by more than one year imprisonment."

"Despite this, the Federal Bureau of Investigation has illegally place Mr. O'Keefe on a federal watch list designed to preclude convicted felons from purchasing firearms by falsely claiming Mr. O'Keefe has in fact been convicted of a felony and has subsequently repeatedly, wrongfully, and without justification denied Mr. O'Keefe the ability to purchase a firearm," the complaint states.

"The lawsuit is being filed in the Southern District Court of New York seeking an order requiring the FBI to remove him from this list as required by law under 18 U.S.C. § 925A," said Jered Ede, who is representing O'Keefe.

"Notably, the FBI has not disclosed what information it is relying on to place him on its watch list,” Ede stated in the complaint filed with the court.

The complaint explains the problem lies with the National Instant Criminal Background Check System, run by the FBI, which "repeatedly denied the ability to purchase a firearm."

"The FBI disclosed that Mr. O'Keefe is identified in the FBI's NICS list as a convicted felon. ... This is patently false," the complaint states. "Mr. O'Keefe has never been convicted of a felony or any other crime defined by Section 9221(g)(1)."

"Simply put, the FBI's placement of Mr. O'Keefe on the NICS deny list for felons is wholly and unequivocally improper and based on demonstrably false information."

The lawsuit seeks an order that the record be corrected as well as compensatory and punitive damages.

BREAKING: I have just filed a lawsuit against the @FBI for infringing upon my 2nd Amendment Right to Bear Arms.

They have erroneously put me on the Federal NICS Background Check System as a convicted felon.