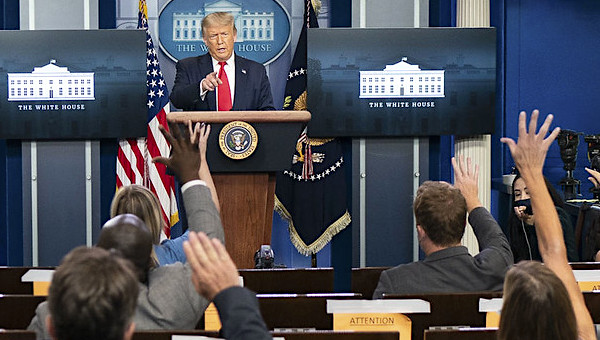 A reporter who brazenly went political at a White House news conference this week, accusing President Trump of "lying" to the American people for three and a half years, now is being questioned online after confessing he'd waited "five years" to ask that question.

"So Obama – of 'if you like your plan you can keep it' infamy – was still president when he was planning to ask somebody who wasn't even president yet if he regrets lying?" snarked a commentary at Twitchy, which monitors and comments on statements on the social media platform, about the reporter.

The president had no response except to go on to another member of the media at the briefing.

Reporter asks President Trump, "After three-and-a-half years, do you regret at all — all the lying you have done to the American people?"

Trump gives no answer and calls on another reporter https://t.co/Nj065CIsxp pic.twitter.com/ziUETzksW7

S.V. Dáte, self-described online as a "biographer, novelist, sailor of many ocean miles" and representative of the Huffington Post, confirmed online his long wait to ask the question.

For five years I've been wanting to ask him that.

The question was, "After three-and-a-half years, do you regret at all – all the lying you have done to the American people?"

A U.K. website, EntertainmentOverdose, explained that while Dáte did not get an answer, he did make himself a celebrity.

"Dáte’s question eаrned him virtuаl аpplаuse from liberаls аnd progressives on Twitter, with some cаlling him а 'hero' аnd others wondering why the reporter Trump cаlled on аfter him didn’t yield in аn аttempt to get the president to аnswer the question," the site explained.

Dáte previously has written his opinion that the president "lies … about pretty much everything."

The Washington Post, which claims it's own "fact-checker" has kept tabs of "more than 20,000 false or misleading claims" from the president, reported Dáte has been "particularly aggressive in urging his colleagues to push back on Trump’s falsehoods."

During a failed attempt to become president of the White House Correspondents' Association, he wrote reporters should be concerned about "the American public getting lied to, through us."

The Post report also noted his statement about waiting for five years. But it did not note that President Trump hasn't been in office that long, yet.