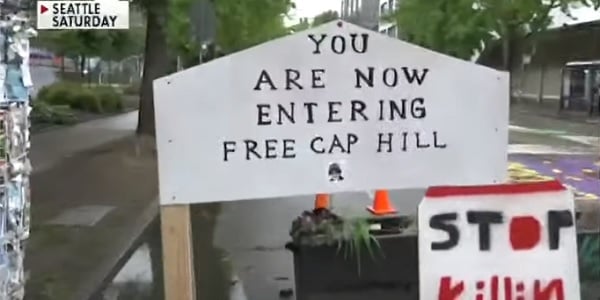 A lawsuit has been filed by Seattle activists who allege they are unconstitutionally forced into situations in which they need expensive gear to battle police.

They declare in U.S. District Court in Washington state that their objective is to cut police funding by half, drop charges against protesters and secure a monetary reinvestment in the black community.

Violent protests in the wake of the death of George Floyd have destroyed property and caused many deaths. The damage estimates have topped the hundreds of millions of dollars.

"Washingtonians are trying to exercise their right to protest in the streets of Seattle to demand an end to police brutality," their case claims. "But the Seattle police department, omnipresent at each protest, wields power and pain on the streets by indiscriminately shooting toxic substances in the air, deploying projectiles at departing protesters, and tossing blast balls into close areas of protesters marching."

They contend the Seattle Police Department "has acted above and outside the law in dispensing its unbridled force, and the city has failed to prevent same, the government effect is to establish a de facto protest tax."

"Individual protesters subjected to SPD's unabated and indiscriminate violence now must purchase cost-prohibitive gear to withstand munitions – even when peacefully protesting – as a condition to exercising their right to free speech and peaceable assembly."

The plaintiffs claim they are forced to endure "unmitigated violence" while exercising their First Amendment rights.

"Only those who have the means to purchase expensive protective gear can engage in First Amendment speech in the streets of Seattle," they insist.

Most "protest-goers" don't have the equipment they need "to safely withstand the force utilized by SPD while on the streets exercising their First Amendment rights," they claim.

"This policy shocks the conscience and cannot be justified as relating to any rational basis."

They want the judge to order the city to instruct police to stand down from using a variety of riot-opposing tactics.

The report said it's "the latest lawsuit against the city of Seattle for its handling of protests that have continued in the wake of George Floyd’s killing. In response to a separate case related to these tactics, involving Black Lives Matter Seattle-King County, the city has argued officers’ actions were directed at individuals and were not indiscriminate."

City officials said they would review the claims.

"Without an injunction restraining their unconstitutional use of force, SPC will continue to deploy the same abusive and illegal tactics it has deployed over the last ten days, threatening the constitutional rights and physical safety of plaintiffs and others," the plaintiffs claim.

They noted in the court decision that paying a fee to vote violates the Equal Protection Clause.

"Similarly, for individuals who have not been able to timely purchase or are unable to afford protective gear, the implication is for those indigent but should be scrutinized carefully given the fundamental interest in the exercise of First Amendment right to freedom of speech."