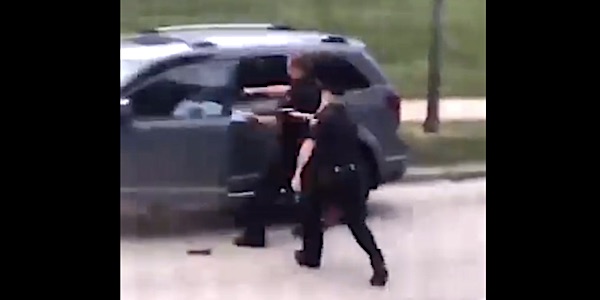 Police in Kenosha, Wisconsin, dispatched to a reported domestic disturbance late Sunday afternoon shot and severely injured a black man, prompting riots and charges by the Democratic governor and Democratic presidential nominee Joe Biden that the officers were motivated by racism.

Rioters burned businesses, smashed windows, threw bleach bombs and injured an officer with a brick in the latest violence to hit an American city since the death of George Floyd on Memorial Day in Minneapolis.

At about 5 p.m. Sunday, officers fired seven shots at Jacob Blake, 29, while he apparently was resisting arrest.

The officers, with guns drawn, were following Blake as he walked to a parked SUV, opened the driver's door and leaned inside.

Blake had a warrant out for his arrest on charges of sexual assault, trespassing and disorderly conduct in connection with domestic abuse, the Philadelphia Inquirer reported. Police had attempted to use a Taser on him prior to the shooting, according to the Kenosha News.

At least a half dozen witnesses said Blake had tried to break up a fight between two women outside the home, the Kenosha paper said.

(WARNING: Video of shooting below is graphic):

"While we do not have all of the details yet, what we know for certain is that he is not the first black man or person to have been shot or injured or mercilessly killed at the hands of individuals in law enforcement in our state or our country," the governor said. "In the coming days, we will demand just that of elected officials in our state who have failed to recognize the racism in our state and our country for far too long."

"As always, the video currently circulating does not capture all the intricacies of a highly dynamic incident," he said in a statement.

Biden also condemned the police involved in the shooting, declaring "another Black American is a victim of excessive force" and attributing the incident to "systemic racism."

"Equal justice has not been real for Black Americans and so many others," he said in a statement. "We are at an inflection point. We must dismantle systemic racism. It is the urgent task before us. We must fight to honor the ideals laid in the original American promise, which we are yet to attain: That all men and women are created equal, but more importantly that they must be treated equally."

Officers responded to the rioting with tear gas, and the crowds eventually turned toward the Kenosha County Public Safety Building, where they clashed with police holding batons and plastic shields.

The rioters set vehicles on fire and smashed windows, as city officials announced a citywide curfew.

The Washington Examiner reported Benjamin Crump, who has represented the family of George Floyd and others in similar high-profile cases, said he had already been called by the family.