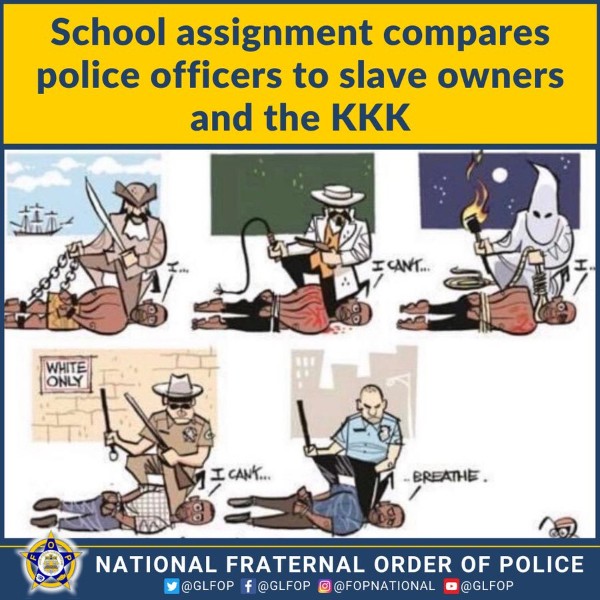 A Texas school district drew a rebuke from the nation's largest police union after a junior high school teacher distributed an assignment that likens police to slave owners and Ku Klux Klan members.

The unauthorized assignment featured a five-panel cartoon of a slave ship officer and others with a knee on a black man's neck. It culminated with a modern-day police officer with a knee on a suspect's neck, the Washington Examiner reported.

The victims, echoing the words of George Floyd, say, "I can’t breathe."

David Vinson, the superintendent of the Wylie Independent School District, northeast of Dallas, apologized after receiving a scathing letter from the Fraternal Order of Police.

The vice president of the nation's largest police organization, Joe Gamaldi, wrote, "I cannot begin to tell you how abhorrent and disturbing this comparison is, but what is more disturbing is that no adult within your school thought better before sending this assignment to children."

Gamaldi, a Houston police officer, said schools "are supposed to be a place where the youth of America are taught acceptance and understanding, it is where we mold the future of our country, not indoctrinate them in the ways of division."

In his reply, Vinson promised he had directed his staff "to review this and reconsider these lessons to be neutral and not take political sides."

"We are teaching, not endorsing. I apologize. It is being corrected for the future," he said.

A spokesman for the district, Ian Halperin, told the Examiner's "Washington Secrets" columnist Paul Bedard that the use of the cartoon was unauthorized.

Halperin explained the unnamed teacher used it as an attempt at "political satire."