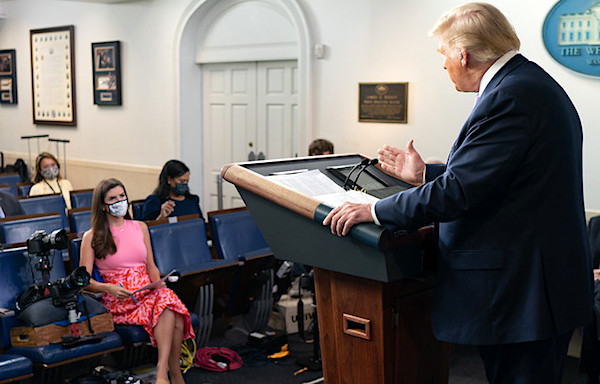 Amid a public backlash, New Jersey's Stockton University has dropped five of its six charges against a doctoral student who used an image of President Trump in his background during a virtual class on Zoom.

The Foundation for Individual Rights in Education confronted university officials on behalf of the student, Robert Dailyda, citing his First Amendment right of free speech.

Stockton now claims a political post on Facebook by the student rather than the Trump background on Zoom is the "substantial disruption" warranting the charge.

Dailyda's post said, "I’m ready to fight to the death for our country and against those that want to take it down."

The university said some students found that to be "threatening."

He also wrote he's had enough of "the leftist agenda of BLM and the white self haters."

Dailyda still faces the punishment of probation, community service, a decision-making workshop and a fine.

FIRE previously warned the university's president in a letter that its charges and possible punishment of Dailyda could violate the First Amendment.

"Dropping some of the charges is a step in the right direction, but it’s not enough," said Zach Greenberg, who wrote to university president Harvey Kesselman a second time on behalf of Dailyda.

"Stockton has no business investigating the political speech of its students, and FIRE will continue to defend Robert’s speech rights," he said.

Dailyda used a photo of the president as his Zoom background during a July 1 virtual class, which triggered others in the class to complain that they were being taunted.

FIRE argued the student's Facebook post is "quintessential political expression meriting the highest level of protection under the First Amendment, which Stockton is bound to uphold."

FIRE said in a second letter to the university that punishing someone for a Facebook post "is also incompatible with Stockton's obligations as a public institution under the First Amendment."

The comment "falls far short of the exacting legal standard of an unprotected 'true threat' – and Stockton itself does not treat it as a threat – as no reasonable person could construe it as a serious expression of an intent to undertake violence."

FIRE said that as a public university, Stockton "must tread carefully with metaphorical political rhetoric; we hope that this is not the hill Stockton wants to die on."