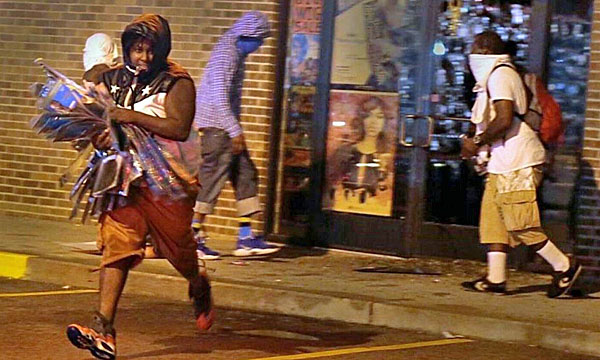 One of the many progressive district attorney's financially supported by left-wing billionaire George Soros requires police officers to consider whether a looter "needed" stolen goods before charging.

Diana Becton, who is in her first term as DA of Contra Costa County in California, has implemented major changes in the way the office is run, the way crimes are charged and how aggressively cases arre prosecuted. One recent change is how people are charged in looting cases, RedState reported.

Her deputy DA, Nichelle Holmes, recently made social media posts proclaiming "We want more than a citation for vandalism" for the couple who painted over a Black Lives Matter mural in her jurisdiction. The office later charged the couple with a "hate crime."

Becton teamed with four other black female DA's backed by Soros -- including St. Louis' Kim Gardner and Chicago's Kim Foxx -- in co-authoring a Politico op-ed Tuesday explaining their philosophy and an 11-point plan. Gardner has charged Mark and Patricia McCloskey for brandishing weapons as they were threatened by Black Lives Matter protesters at their home. Foxx is known for dropping charges against Jussie Smollett in the high-profile hoax-assault case.

"Its injustices are not new but are deeply rooted in our country's shameful history of slavery and legacy of racial violence. The system is acting exactly as it was intended to, and that is the problem," they wrote.

"We should know: We’re Black, we’re female, and we’re prosecutors. We work as the gatekeepers in this flawed system. And we have some ideas for how to fix it."

They wrote that they are "working from within" to begin "to rectify past wrongs."

"We are implementing policies that include declining to prosecute minor offenses, overturning wrongful convictions, refusing to take cases from officers with a history of racial bias and expunging marijuana convictions," they said. "And we are currently working within our own offices to make the system fairer and more just."

Among the "racial equity-minded policies" are "Looting Guidelines" that RedState acquired through a confidential source and was verified by a separate source.

In California, a looting charge essentially increases the severity of a burglary or theft charge if it occurred during a State of Emergency. A looting charge can be filed as a misdemeanor or a felony and is punishable by up to three years in jail.

Essentially, deputy district attorneys and law enforcement officers must go through a flow chart, including a psychological and financial analysis, to determine if looting charges should be filed.

Factors to consider include whether the theft was "committed for financial gain or personal need."

RedStates' Jennifer Van Laar noted there are numerous cities and counties in which Soros-backed DA's are up for election this year.

"Their potential constituents need to realize that these are not garden-variety leftists running for District Attorney; they are revolutionaries committed to destroying our justice system," she wrote.

Van Laar posted video of looting in May at Vans and Urban Outfitters stores in Walnut Creek, which is in Becton's district.