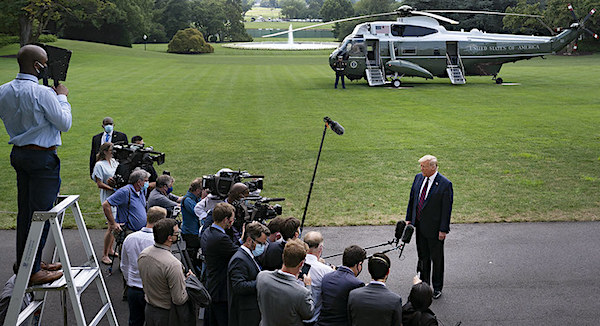 President Donald J. Trump talks to members of the press assembled on the South Lawn driveway of the White House Monday, July 27, 2020, prior to boarding Marine One to begin his trip to North Carolina. (Official White House photo by Joyce N. Boghosian)

The vast majority of Americans consider news bias to be “a major problem,” but more than half believe the issue is with the news other people consume, according to a survey from Gallup and the Knight Foundation released Tuesday.

Nearly half of the adults surveyed believe there’s “a great deal” of “political bias in the news,” while 37% believe there’s “a fair amount,” according to the survey. Nearly three-fourths, 69%, note they’re more worried about bias in others people’s news than their own.

Among adults surveyed, 78%, responded that “the spread of misinformation online is a ‘major problem,'” the poll found.

When asked about diversity at news outlets, 79% of adults said media companies should take diversity into account when hiring reporting staff, according to the survey.

Nearly half of Democrats and 60% of black people think news companies should place ethnic and racial diversity as important when hiring people. Among Republicans, 51% and 40% of white people responded that political diversity should prioritize political diversity in hiring decisions, according to the survey.

Overall, 80% agree that “the media is under attack politically,” but 61% of Republicans said that the attacks on the media were “justified,” while 70% of Democrats said the opposite, according to the poll.

Among adults under 30, 19% responded that they had a “very or somewhat favorable” perspective of the media, compared to 44% of adults over 65 years old who said the same, according to the survey outline.

Forty-eight percent said the media carries “a great deal” of blame “for the political divisions in the U.S.,” and 36% say the media deserves “a moderate amount” of blame.

The Knight Foundation used data collected from Nov. 8, 2019 until Feb. 16, 2020. The surveys were mailed to 20,047 adults. Gallup relied on data from 137,000 U.S. households, oversampling typically hard-to-reach households including black, Hispanic and young adults, according to the survey methodology. The survey had a sampling error of plus or minus 1%.