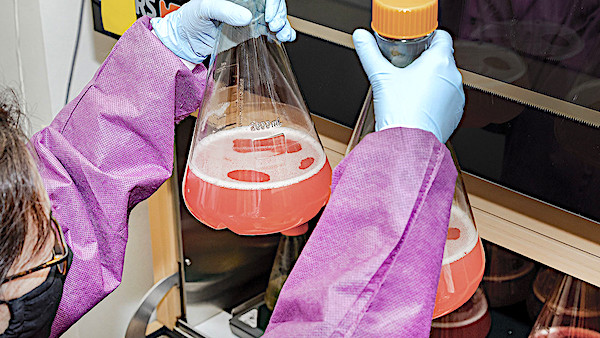 A scientist with the Emerging Infectious Disease branch at the Walter Reed Army Institute of Research conducts studies to find a vaccine for COVID-19, July 7, 2020. (U.S. Army photo by Shawn Fury)

Scientists at a Wuhan laboratory argue that they are being unfairly blamed for the pandemic after reports indicated that most U.S. intelligence agencies believe COVID-19 leaked from a Wuhan lab, NBC News reported Monday, citing interviews with the researchers.

“It is unfortunate that we have been targeted as a scapegoat for the origin of the virus,” Wang said during the interview, which took place while representatives of the government were present. “Any person would inevitably feel very angry or misunderstood being subject to unwarranted or malicious accusations while carrying out research and related work in the fight against the virus.”

Wang and Yuan denied that the virus originated at the institute, and argued that scientists at the facility obtained their first samples of the virus after the disease began spreading.

The NBC report comes months after Fox News White House reporter John Roberts reported in a May 2 tweet that a senior intelligence source told him that “there is agreement among most of the 17 Intelligence agencies that COVID-19 originated in the Wuhan lab. The source stressed that the release is believed to be a MISTAKE, and was not intentional.”

Yuan dismissed the idea of a leak.

“I have repeatedly emphasized that it was on Dec. 30 that we got contact with the samples of SARS-like pneumonia or pneumonia of unknown cause sent from the hospital,” Yuan said during the interview. “We have not encountered the novel coronavirus before that, and without this virus, there is no way that it is leaked from the lab.”

U.S. officials believe the virus originated in Wuhan, China, in late December before spreading to the United States, where it has reportedly killed more than 160,000 people, according to data from the John Hopkins University. Experts have also speculated that the virus emanated from the Huanan Seafood Market in Wuhan, a so-called wet market where vendors sell live animals for consumption.

Scientists say the virus made its appearance through a process that ends in the creation of a zoonotic disease, a virus that leaps from animals to people.

Zoonotic diseases happen when wild and exotic animals are mixed with domesticated species in an environment that weakens the animals’ immune systems, leading to a mix of genetic code that can spread from one species to another, Kevin Olival, vice president for research at the EcoHealth Alliance, told The New York Times in January.

“So far, there is no evidence to show that the novel coronavirus jumped from animals to people in Huanan Seafood Market in Wuhan,” Yuan said. It is not yet clear “how it jumped from the natural or immediate hosts to humans in the early stages, from what animal and when and how the spillover happened.”