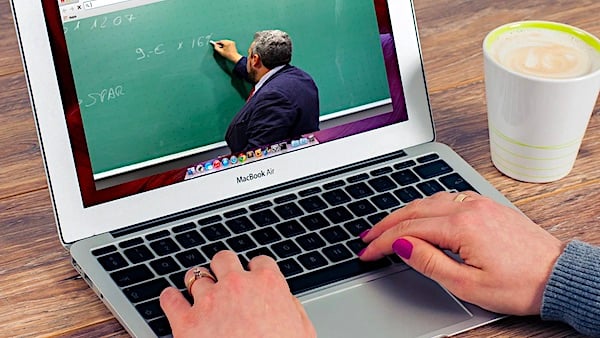 A public schoolteacher in Philadelphia is fretting that "conservative parents" may be able to listen in on his virtual classes.

The Washington Examiner reported the concerns were from Matthew Kay, an instructor who worried that his "what happens here stays here" philosophy may be violated.

"So, this fall, virtual class discussion will have many potential spectators – parents, siblings, etc. – in the same room. We’ll never be quite sure who is overhearing the discourse. What does this do for our equity/inclusion work?" Kay tweeted.

"How much have students depended on the (somewhat) secure barriers of our physical classrooms to encourage vulnerability? How many of us have installed some version of ‘what happens here stays here’ to help this?" he wondered.

Kay is an English instructor at the Science Leadership Academy, a public school.

He said he now fears the potential "damage" from parents who overhear his lessons to their children on "gender and sexuality."

Daily Wire columnist Matt Walsh called it "one of the creepiest yet most revealing Twitter threads ever to be posted on the platform."

Kay worried that "conservative parents" somehow would be able to interfere with the "messy work" of indoctrinating children.

Kay said he was concerned aboug never being quite sure "who is overhearing" the lessons.

"While conversation about race are in my wheelhouse, and remain a concern in this no-walls environment — I am most intrigued by the damage that 'helicopter/snowplow' parents can do in the host conversations about gender/sexuality. And while 'conservative' parents are my chief concern — I know that the damage can come from the left too. If we are engaged in the messy work of destabilizing a kid’s racism or homophobia or transphobia — how much do we want their classmates’ parents piling on?" Kay wrote.

Walsh pointed out that other teachers began sharing their own strategies for "brainwashing during a pandemic."

One said she would ask students about their preferred pronouns.

Another complained that a "white parent" recorded a Zoom class and filed a complaint, which the teacher was going to be "an issue."

A ninth grade teacher said participation in class was "stunted" since "outsiders," mostly the children's parents, were listening.

Walsh said classrooms are not "safe" places for children, because public shool workers say "bullying is a major problem for today’s youth and many of them are driven to self-destruction because of it."

"So, which is it? Is the classroom a place for open and genuine dialogue, where children can safely express their truest feelings and beliefs, or is it a place rife with bullying and mockery, where rigid conformity is demanded and those who fail to meet the demands are severely punished? It certainly can’t be both," Walsh said.

Further, an adult keeping a secret with a child, and "helping the child conceal that secret from his parent – especially when the secret has anything to do with sexuality – is acting in a way that is nothing short of predatory," Walsh wrote.

Finally, he argued, teachers are supposed to teach.

"A child’s actual parents only come to be viewed as 'dangerous' interlopers and intrusive 'outsiders' when teachers begin to view themselves and the school system as the true guardians and conservators of the children that are temporarily in their care."