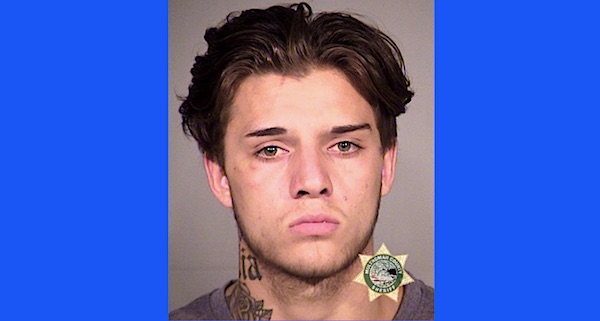 An 18-year-old man was arrested after allegedly setting off an explosive device that injured a U.S. marshal, the Department of Justice announced Monday.

The explosion took place July 22 at the Mark O’Hatfield U.S. Courthouse, damaging the U.S. marshal’s legs, according to the Justice Department.

U.S. marshals spotted Maza July 31 near the courthouse and arrested him after a short foot chase, according to the press release.

Court documents state that Maza lit and put a “cylindrical object” inside a window that he and others had broken, the press release said. The device exploded while law enforcement officers were exiting the building, according to the Justice Department.

Isaiah Jason Maza, Jr., 18, of Portland, has been charged by criminal complaint with assaulting a federal officer with a dangerous weapon and willfully damaging government property during protests at the Mark O. Hatfield U.S. Courthouse on July 22, 2020: https://t.co/f8FUqfqeqy

Maza appeared in court Monday, where a U.S. magistrate judge ordered his detainment until further court action, the press release said. The punishment for assaulting a federal officer with a “dangerous weapon” is a maximum 20-year prison sentence and a $250,000 fine, and the maximum sentence for purposefully damaging government property is 10-years in prison and a $250,000 fine, according to the press release.

Violent protesters in Portland have targeted the federal courthouse and have clashed with law enforcement, according to Daily Caller reporters on the scene. Democratic Mayor Ted Wheeler of Portland criticized the federal government’s deployment of federal officers, calling it “unconscionable and un-American,” according to a July 23 Twitter post.

Protests have been a frequent occurrence in Portland since the death of George Floyd, a black man who died after now-fired Minneapolis police officer Derek Chauvin knelt on his neck for nearly nine minutes, video footage of the incident shows.

The Department of Justice and the U.S. Attorney’s Office District of Oregon did not immediately respond to the Daily Caller News Foundation for comment.