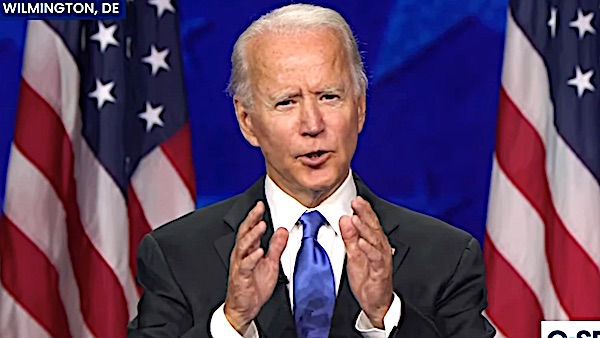 In the case of the Democrats, a kind of poetic justice was achieved last week when a virtual convention nominated a virtual candidate for what promises to be a virtual presidency.

COVID-19 made both major parties opt for political conventions that don’t put delegates and others at risk with large in-person gatherings, but for Democrats, lessening the risk of disease also meant lessening the risk of the public finding out that there is less than meets the eye to Joe Biden and his candidacy.

What was obvious from start to finish was that a pre-recorded, pre-scripted, pre-ordained infomercial gave Democrats the perfect opportunity to divert the attention of America away from their doddering candidate and their socialist policies into a fawning celebration of phony feel-good sloganeering and Trump hatred.

While the actual words spoken at the convention were for the most part snooze-worthy, what was left unsaid is like the proverbial nine-tenths of an iceberg lurking beneath the water. If and when the USS Biden crashes and sinks, it will be because of all those things Democrats don’t want to talk about, starting with the fact that 59% of voters expect Kamala Harris to finish out the four-year term of a presumptive President Biden, if not be the virtual president from the start.

Maybe that would be a good thing since so many people suspect Biden has cognitive issues, but it raises the specter of another word never heard at the Democratic convention, not even in the speech of leftist Sen. Bernie Sanders, and that is “socialism.” That’s because most Americans do not support fundamentally transforming the American economy from its capitalist roots into a socialist “paradise” like Venezuela. Most Americans don’t, but Harris does — at least in part. She co-sponsored Sanders’ single-payer “Medicare for All” plan that would cost $32 trillion before she realized it was a political millstone around her neck. She also famously pledged “to invest $100 billion of federal money into housing assistance for black families as part of an effort to close the racial wealth gap in the United States.” Wait! Isn’t that illegal discrimination and a blatant violation of equal protection under the law? Yes, it is.

It’s also hard to talk about the Constitution and its promises to “insure domestic tranquility, provide for the common defense, promote the general welfare and secure the blessings of liberty” when you are allowing mob rule in major cities. I’m not sure how the Democrats can sweep this under  the rug, but let’s remember that as a party they oppose the use of force by police, Homeland Security or the National Guard to protect our people, our homes and our businesses. And because Democrats know that the vast majority of Americans have an uncanny interest in the safety of themselves and their families, this convention never got around to a discussion of the anarchy in Portland, Seattle and elsewhere.

There was plenty of talk about the COVID-19 pandemic and the economic impact of a massive lockdown, with speaker after speaker blaming President Trump for the deaths of tens of thousands of Americans. Former President Obama, taking the gloves off, was representative of the general theme:

“Donald Trump hasn’t grown into the job because he can’t. And the consequences of that failure are severe: 170,000 Americans dead. Millions of jobs gone. Our worst impulses unleashed, our proud reputation around the world badly diminished, and our democratic institutions threatened like never before.”

This was a shameless politicization of a national emergency — and a national tragedy — and again what mattered more than what was said was all that was left unsaid. Did anyone hear a Democrat politician blame China for unleashing the virus on not just the United States but the entire world? In complaining that Trump was too slow to react to the virus, did any Democrat mention that Nancy Pelosi and Chuck Schumer and Biden were all critical of Trump’s decision to shut down air traffic from China last winter? Did any of them have the courage to talk about how China used the virus as a political and economic weapon against the United States?

For that matter, did anyone mention how Biden had dismissed the threat of China to the United States back in May 2019 when he said this while campaigning in Iowa City: “China is going to eat our lunch? Come on, man. I mean, you know, they’re not bad folks, folks. But guess what? They’re not competition for us.”

Really? This is the man to whom Democrats want to entrust not just our economy but our national security?

Of course, Biden has good reason not to mention China because when you think about Biden and China, you have to talk about Hunter Biden as well — the former vice president’s son who accompanied his dad to China on Air Force Two and emerged with a $1.5 billion investment deal. And the last thing you want to talk about if you are Joe Biden is Hunter Biden — although it can’t exactly be avoided, can it? Hunter even got a moment on stage Thursday night when he and his sister, Ashley, introduced their dad. Good for him, but that’s not the last you will hear of Hunter, even if Democrats hope it is.

So, yeah, the less said about Ukraine, the better.

But when you come right down to it, Democrats didn’t want to talk about anything of substance during their four-day coronation. Green New Deal? Better not tell voters you want to take away their SUVs, raise their taxes and shut down 10 million jobs. Foreign policy? Besides liking China and loving Iran, what does Biden have to talk about? If he talks about the Mideast, he has to acknowledge that Trump’s hard-line support for Israel and opposition to Iran are paying huge dividends in the form of a new peace deal that could be the first of many.

And there is one other issue that may be the most glaring omission in the list of things not acknowledged: the #MeToo movement that empowered women to come forward and speak out against their alleged abusers. You would think with a woman selected to be Biden’s running mate, he would want to emphasize how he is a longtime supporter of women’s rights, including the right to be safe from abuse. But that is a “touchy” issue — literally.

It’s not any secret that Joe Biden has a history of unwanted touching. He apologized for it, sort of, after a former Democratic candidate for lieutenant governor in Nevada accused him of inappropriate intimacy.

“So I invaded your space. I’m sorry this happened,” he told various unnamed women while appearing on “The View” back in April 2019. “But I’m not sorry in the sense I think I did anything that was intentionally wrong or did anything inappropriate.”

That is essential Biden. He never quite gets around to admitting anything. Did he or did he not, for instance, intentionally plagiarize Neil Kinnock when he ran for president back in 1988? I think the answer we got from Biden then should perhaps be reserved as his epitaph: “I've done some dumb things, and I'll do dumb things again."

Maybe the dumbest thing Biden ever did was win the nomination this time around, because nothing will be hidden from view in the next 71 days. Joe Biden and the far-left agenda he now represents will be an open book.  Starting with the GOP convention tonight, you can expect to hear the words China, Ukraine, Mideast and Hunter repeatedly. If the Democrats think they have this thing won, they had better come out from under their cone of silence and look at the iceberg up ahead.