As a community organizer in Los Angeles before entering politics, California Rep. Karen Bass said it was a “miracle” that hundreds of neighborhood liquor stores were burned down during the riots of 1992, asserting that the arsons “accomplished” what her activist group had fought for years to achieve.

“That’s not the way we wanted it to happen, but the rioting accomplished in a few days what we have spent decades working to achieve,” Bass told The New York Times in an article published in November 1992.

Bass, who is now considered a top contender for Joe Biden’s running mate, began organizing in 1991 to shut down liquor stores, many of which were owned by Korean immigrants. She argued that the stores served as hotspots for violence, prostitution and other crimes that blighted poor, majority-Black neighborhoods in Los Angeles.

Bass and members of the group she founded, the Community Coalition for Substance Abuse Prevention and Treatment, met with then-Mayor Tom Bradley the night before the riots started (they began on April 29, 1992 after the acquittal of police officers who beat Rodney King) to discuss strategies to force liquor stores out of business, according to a report that the organization published in 2018.

She also referenced the meeting in her comments to the Times back in 1992.

“The night before the uprising, a lot of us were in a meeting discussing how we might reduce the number of liquor stores in South Central, and a few days later, like a miracle, a large chunk of the stores we wanted to close were burned to the ground,” Bass told the newspaper.

Bass has seen her star rise in the Biden veep-stakes thanks to her push for police reform in the wake of the death of George Floyd, a black man who was killed by a Minneapolis police officer in May. Biden has come under heavy pressure to choose a woman of color as his running mate, and Bass has reportedly received private endorsements from prominent California Democrats, including House Speak Nancy Pelosi.

She has offered a more nuanced view of the riots in recent years. 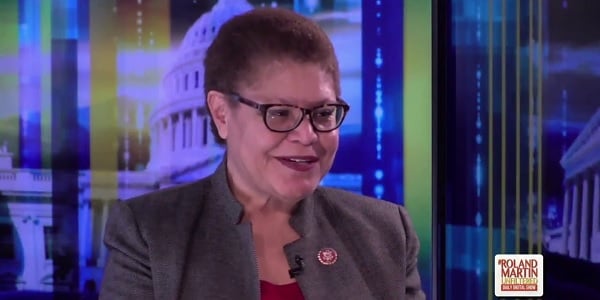 “I just drove around feeling that all of the years of my involvement and all of the things I had tried to do had been a failure,” she said of the L.A. riots in 2011, according to a profile that the Times published on her in June.

“I failed the young people because they felt no outlet other than to destroy.”

Bass said in an interview on MSNBC on May 29, in the wake of George Floyd’s death, that the L.A. riots were “just awful, many people died.”

A spokesman for Bass told The Daily Caller News Foundation for this story that “any assertion that Rep. Bass supports violence then or now is fundamentally false and disingenuous.”

“Rep. Bass believes riots and violence are never solutions to systemic societal problems, not in 1992 and not in 2020,” the spokesman said.

“The record shows Rep. Bass has repeatedly called the 92 unrest a tragedy which destroyed the very neighborhoods she was working to improve; and a failure of leadership because young people felt they had no outlet and so they burned down the community.”

After the L.A. riots, which left 63 people dead and caused more than $1 billion in property damage, Bass waged a public pressure campaign to keep liquor stores from reopening. According to the report from the Community Coalition, which Bass left when she ran for the California assembly in 2004, more 150 of the 200-plus liquor stores that were burned down remained permanently closed after the riots.

Bass, who chairs the Congressional Black Caucus, offered little sympathy for store owners in the numerous interviews she gave on the liquor store issue following the riots.

She said in a June 2, 1992 op-ed in The Los Angeles Times that liquor stores had helped “fuel the rage” that led to the violence.

“Community concerns also extend to the environment around the stores, where drinking often creates a climate that fosters gambling, theft, drug sales and violent assaults,” she wrote.

“It is not the desire of the community coalition and others concerned about this issue to drive business owners into bankruptcy. It would be a tragedy, however, to rebuild and replace the very structures that help fuel the rage in South Los Angeles,” Bass wrote.

She offered similar remarks in an interview with the Associated Press.

“If people burned down those stores, they must have been unhappy with them,” she told the AP in a story published on Nov. 16, 1992.

According to the article, which is no longer online, Bass and her group organized people in the neighborhood to petition against the reopening of a store owned by a Korean immigrant.

Bass acknowledged that the fight over liquor stores had devolved into a racial issue since most liquor store owners in heavily African-American neighborhoods were Korean immigrants.

”If a store has contributed to community problems, we don’t want it back. The ironic thing is, when we address the problem we are told we are racist or anti-business. Then we are told the reason we are in the predicament we’re in is because we allow it to happen,” she told The San Francisco Chronicle in July 1992.

Bass has come under heavy scrutiny as her star has risen in the Biden veep-stakes.

On Friday, the Daily Caller News Foundation reported that Bass praised the Church of Scientology at the grand opening of one of the cult’s facilities in Los Angeles in 2010. The Atlantic reported that Bass worked in Cuba in the 1970s as part of the Venceremos Brigades, which organized trips for young leftists to the communist regime.

Bass renounced her past praise for the late Cuban leader Fidel Castro in an interview on Sunday. On Saturday, she addressed her past support for Scientology, saying that the group has been “exposed” in the decade since she praised it.

Bass’s office did not respond to a request for comment for this story.