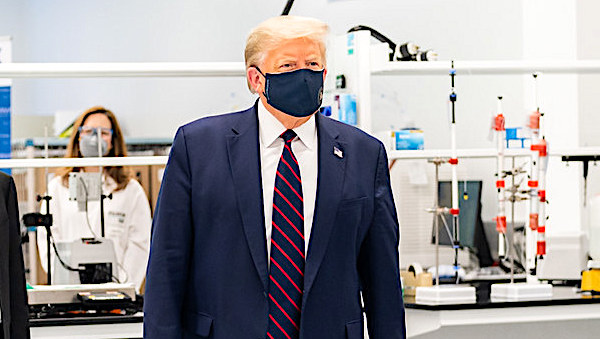 If you get COVID-19, you don't want to be admitted to a hospital, warns a research paper published by the American Journal of Medicine.

In fact, therapy at home or out-patient treatment could prevent thousands of hospitalizations and deaths, article by Peter McCullough, M.D., a cardiologist at Baylor, and 18 other researchers who mostly are physicians.

Young healthy patients will likely do well with only watchful waiting and self-quarantine, they contend.

COVID-19 patients over age 50 or who have other risk factors or worsening symptoms should be treated with zinc and antivirals, recommends McCullough and his colleagues in a chart they produced.

Their protocol lists hydroxychloroquine with azithromycin or doxycycline, or favipiravir, which is available in Japan. For respiratory symptoms they suggest prednisone and/or colchicine. For suspected clotting, aspirin and/or blood thinners.

The death rate for patients sick enough to be admitted to a hospital is quite high, warn McCullough and his colleagues.

"Most patients who arrive to the hospital by emergency medical services with COVID-19 do not initially require forms of advanced medical care," they point out in the abstract.

"Hence, it is conceivable that some if not a majority of hospitalizations could be avoided with a treat-at-home first approach with appropriate telemedicine monitoring and access to oxygen and therapeutics," they write.

The Association of American Physicians and Surgeons, in a statement highlighting McCullough's paper, said anyone hospitalized will "probably be a prisoner with no visits from family, clergy, or the doctor of your choice."

"Unfortunately, many doctors will provide nothing besides an order to get a test, and advice on when to go to the emergency room," AAPS said. "They are told by their employer or their medical society or public health officials that there is nothing they can do."

Definitive randomized controlled trials for the protocols are not yet available, but McCullough and his colleagues "emphasize the immediate need for management guidance."

The American Medical Association and others do not recommend home treatment, AAPS points out. They advise merely waiting for the promised vaccine.

Patients need to call their doctors, AAPS emphasized, and ask whether they are willing to read the McCullough paper or other studies about out-patient treatment with hydroxychloroquine and prescribe it.

"It is important for patients to have a trusted physician who shares their views," AAPS said.

AAPS on Monday noted the FDA has denied a request for emergency use of hydroxychloroquine after a clinical trial showed it to be effective.

However, the anti-malaria drug, which has been safely used for more than six decades, can be used to treat COVID-19 off label.

The FDA "continues to obstruct the use of a long-established antimicrobial that can also be used in outpatients, to prevent the need for hospitalization," said Dr. Jane Orient, the AAPS executive director.

Orient noted a research team with the Henry Ford Health System in Detroit filed a request with the FDA for emergency use authorization for preventive and early treatment of COVID-19 with hydroxychloroquine. The request came after the researchers found hospitalized patients showed a 51% reduction in mortality.

"Because of FDA's negative statements about HCQ (hydroxychloroquine), patients are having great difficulty in obtaining HCQ," Orient said.

She pointed out that it could cost tens of thousands of lives, according to Yale professor of epidemiology Harvey Risch.

Risch told Fox News host Mark Levin on Sunday he has never seen anything like the current campaign to suppress the use of the life-saving treatment and even information about it.

A global analysis showed a 79% difference in mortality with the use of hydroxychloroquine.