U.S. Attorney John Durham has been investigating the Obama administration's use of intelligence agencies to spy on Donald Trump's 2016 presidential campaign.

What's already known is that the now-debunked Steele dossier, a political opposition research document funded by the Hillary Clinton campaign, was used as evidence to obtain surveillance warrants.

Durham's inquiry has turned into a criminal investigation.

Now President Trump says that what has been uncovered is "breathtaking." 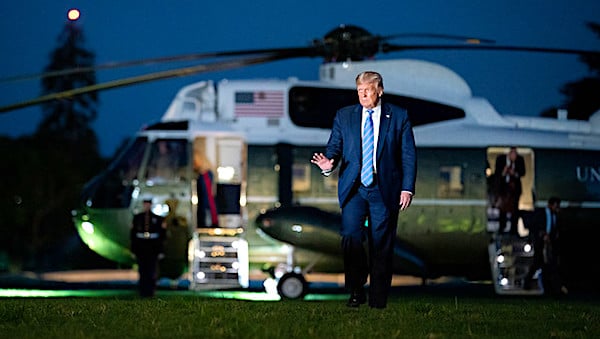 Just the News reported the president spoke late Tuesday on the issue.

"I caught them, we caught them spying, using the intelligence apparatus of our country to spy on an opponent or an opposing party’s campaign both before and after the election," Trump explained in an interview with Fox Business Network host Lou Dobbs.

"I do hear it is breathtaking what they found. That’s all I can say, breathtaking. And hopefully it will come out soon. But it is beyond what anybody ever thought even possible,” the president said.

Sounds like Durham is done! Trump has seen the goods!

Fox News host Sean Hannity recently said Democrats are "scared to death" of what Durham is uncovering in his investigation.

The Daily Caller News Foundation reported Attorney General William Barr confirmed that Durham is looking into whether Russian operatives fed disinformation to Steele, who then put it in his report and gave it to Democrats.

"I think that's one of the most troubling aspects of this whole thing," Barr said in a recent interview.

The collusion allegations were debunked by the two-years-plus investigation of special counsel Robert Mueller.

But Barr said Mueller “ignored” evidence that Russian intelligence operatives might have fed disinformation to Steele.

Durham's conclusions are expected within months and could come before the November election.

While Barr has said Obama and Joe Biden are not targets of the probe, former U.S. attorney Joseph diGenova says the two will be shamed nevertheless.

"I happen to believe that the public shaming of former President Obama and Vice President Biden is far more important than indicting them," he said in an interview with Boston radio host Howie Carr.

"Now, as to President Obama and Vice President Biden, whatever their level of involvement, based on the information I have today, I don't expect Mr. Durham's work will lead to a criminal investigation of either man. Our concern over potential criminality is focused on others," Barr said.

How the Centers for Disease Control hurt the fight against COVID