President Donald Trump is thinking big, and Americans may be the beneficiaries.

Trump was interviewed this week during a visit to West Texas and spoke to KMID-TV about his thoughts for the next round of stimulus checks that may come to Americans because of the impact of the coronavirus on the nation's economy.

"I think probably we’re going to have something that is going to be very good over the next week or so," Trump said.

"We want to take care of people that don’t have jobs. We're taking care of a lot of people. Very important. We have to do it smart, but we want we very generous," he said.

When asked whether $1,200 -- the amount doled out in the first round of checks -- was enough, Trump replied, "We’re going to see. It may go higher than that, actually."

On Monday, Senate Republicans proposed a second round of $1,200 direct payments to American families based upon income, Fox News reported.

The president was asked how high he would like to see the payments go.

"I’d like to see it be very high because I love the people. I want the people to get it," he said.

Trump voiced confidence in the future, despite the impact of the virus.

"You know, the economy is going to come back. We just had tremendous job numbers, as you know. It was just announced. We had great retail sales numbers, so this is all coming back," he said.

The president added that although saving lives took priority over a continued economic expansion, America will rebound.

"We had the greatest economy we’ve ever had and we had to close it up because you know we had to do it. We saved millions of lives by doing that but now we’re bringing it back and that's going to come back," he said.

But, Trump added, "We've got to take care of the people in the meantime."

That may be easier said than done.

Pelosi & Schumer have no interest in making a deal that is good for our Country and our People. All they want is a trillion dollars, and much more, for their Radical Left Governed States, most of which are doing very badly. It is called a BAILOUT for many years of bad Dem Mgmt!

"We don't have an agreement on anything," Treasury Secretary Steven Mnuchin said earlier in the week after meeting with Senate Minority Leader Charles Schumer and House Speaker Nancy Pelosi.

House Democrats have passed what they have dubbed the HEROES Act, which called for spending about $3 trillion.

The Senate's HEALS Act would spend about $1 trillion. 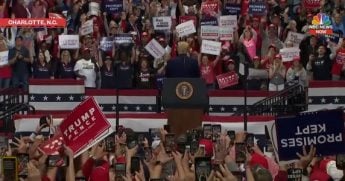