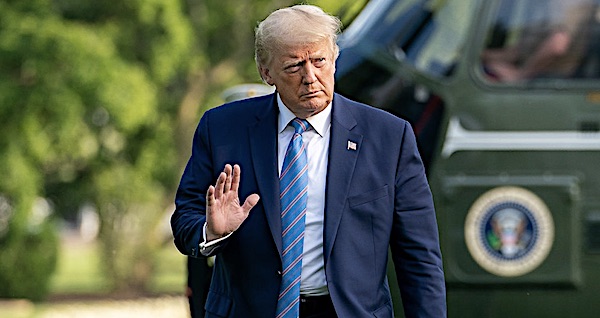 What did President Trump mean when he told employees of an Ohio manufacturing plant in a speech Thursday that he has a lot of "rich enemies" who are very unhappy with his policies and it "may be the last time you'll see me for a while"?

Whatever his intent, the remark has prompted prayers for his personal safety as he continues to confront issues his predecessors wouldn't touch, such as China's corrupt trade policies.

In this instance, it was the drug establishment. The remark came as Trump told employees at the Whirlpool Corporation Manufacturing Plant in Clyde, Ohio, of an executive order that will require U.S. government agencies to purchase essential drugs only from American sources, reported Summit News.

He noted that drugs are cheaper in other countries, such as Canada, even if they are made by the same company.

"So I have a lot of enemies out there. This may be the last time you'll see me for a while. A lot of very, very rich enemies, but they are not happy with what I'm doing," said Trump.

Among the enemies, he said, are wealthy anonymous "middlemen" who skim profits from pharmaceutical sales.

On Friday, a national Christian ministry founded in 2001 called the Presidential Prayer Team posted an update its website about the remark titled "PRAYER ALERT – President Trump Speaks of Powerful Enemies."

It urged prayer for "President Trump and his personal safety and the safety of his family."